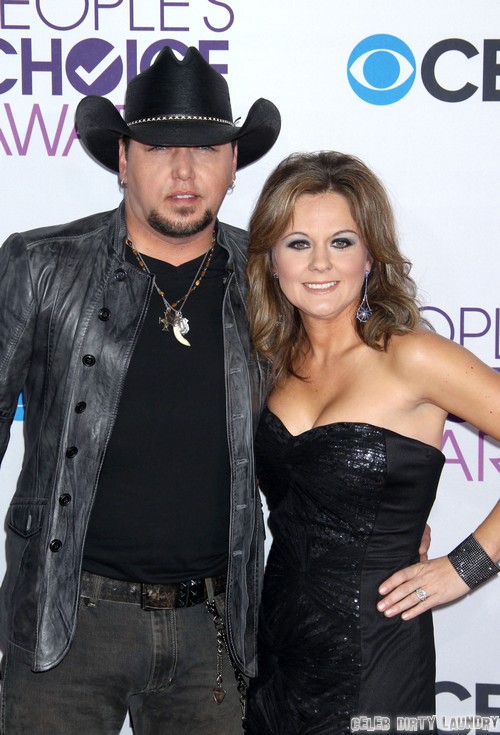 Country singer Jason Aldean has separated from his wife Jessica Ussery after he was snapped kissing Brittany Kerr back in September.

After Brittany was photographed basically straddling Jason in a bar, he released a statement saying that he was just plain drunk. He said, “Hey Guys – I wanted to talk to you directly, so you were hearing the truth from me and not just reading allegations made about my personal life on gossip web sites. The truth is that I screwed up. I had too much to drink, let the party get out of hand and acted inappropriately at a bar. I left alone, caught the bus to our next show and that’s the end of the story. I ultimately ended up embarrassing my family and myself. I’m not perfect, and I’m sorry for disappointing you guys. I really appreciate being able to work through this privately with my family and for all your continued support.”

Jason and Jessica were trying to move past the incident together, but have been struggling with that. So, they have decided to take some time apart. TMZ reports:

We’re told Aldean and his high-school sweetheart Jessica Ussery have been struggling ever since the “Dirt Road Anthem” singer put the moves on Season 11 “A.I.” contender Brittany Kerr in front of a bunch of people at a Hollywood bar.

Aldean and Ussery initially tried to move past the incident together — and they even walked a red carpet side-by-side back in November.

But now, Aldean’s rep says the couple is “having problems” … and sources tell us they’ve decided to take some time apart.

There is only so much you can blame on alcohol, isn’t there? Perhaps Jessica thought that if he did it once, he would do it again. What do you think?