Jason Statham’s Partying With Other Women Driving Rosie Huntington-Whiteley Away – Breakup and Jealousy? 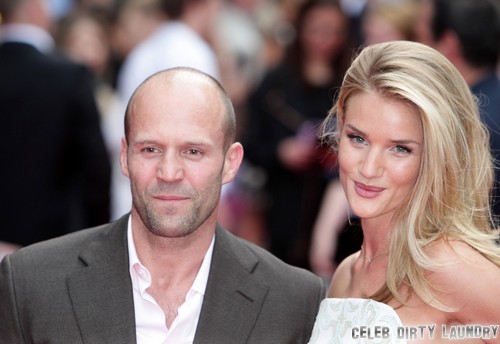 Jason Statham and Rosie Huntington-Whiteley have been dating for some time now, but there are rumors that their relationship is falling apart because of Jason’s drinking and partying.

Star Magazine reports that Jason has been partying more than normal lately and at one particular party, a supposed eyewitness claims, “Jason was having the time of his life. He was throwing back shots, surrounded by gorgeous women. He never mentioned Rosie.”

Regardless of his relationship status to Rosie, Jason Statham has been partying for a long time. He’s often spotted at clubs and parties, which in all honesty isn’t that unusual for celebrities in Hollywood. There’s also the fact that ‘gorgeous women’ always surround movie stars in these types of venues, regardless of whether they know the star is attached or not. There’s been celebrities in the past who have admitted that women will come up to them and slip them their numbers in front of their respective wives/girlfriend.

There’s also the fact that Rosie Huntington-Whiteley is an incredibly in-demand supermodel. She’s probably more busy than Jason is right now, especially if the stories about him partying are accurate,and it’s also not really a sign of trouble that she’s not with him at one industry party.

What do you guys think? Do you think Jason Statham and Rosie Huntington-Whiteley are still together? Do you think it’s a sign of trouble to see Jason Statham partying and drinking without his girlfriend? I certainly don’t view that as a sign of trouble, but then again, Jason and Rosie haven’t been spotted together for some time now. They could be taking some time apart, and that could be why Jason has been seen acting like a single man. However, their reps have already confirmed with Gossip Cop [ugh] that they’re still together and happier than ever. Since reps are known to lie all the time, I’d take it with a grain of salt, but since there’s no reason to think otherwise – well, then, Jason Statham and Rosie Huntington-Whiteley are still together.