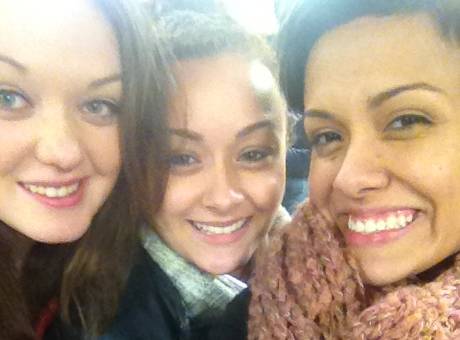 Apparently there is still some bad blood between the cast of Teen Mom 2 and Teen Mom 3. Actually let me rephrase that, there is still some bad blood between Jenelle Evans and the cast of Teen Mom 3, the rest of the Teen Mom 2 girls have better things to do than sit around and bicker on Twitter (maybe Jenelle should take notes). It all started a few weeks ago when MTV cancelled Teen Mom 3, and Jenelle Evans poked fun at the Teen Mom 3 girls, and they made it very clear that the only reason Jenelle’s series hadn’t been cancelled is because she is a train-wreck and brings in viewers.

Today Jenelle tweeted this when she was talking to one of her followers, “oh, like Briana’s mole?” Within a matter of minutes Teen Mom 3’s Briana and Britt DeJesus called Jenelle out on her tweet. Brit’s sister Briana also has a mole on her face, and they assumed Jenelle was referring to her. Jenelle quickly tried to diffuse the situation and explain that she was talking about Nathan Griffith’s ex-girlfriend Briana, but it was too late.

We will probably never know whose mole Jenelle was referring to, but it is really irrelevant, it’s what happened next that is hilarious. The Dejesus sisters went up one side of Jenelle and down another. Britt even threatened to “beat her ass.” According to Britt there has been some animosity between Jenelle and them for quite a while. The sisters had to share a hotel with Jenelle, and she stunk up the entire floor smoking and getting “sky high.” It has been all downhill between the girls since then.

Briana went on to call Jenelle “trailer trash,” and accused her of “sniffing coke,” and “choosing drugs over her son.” When Jenelle accused Briana of being “spoiled” and having everything handed to her, she went off on a rant. Here’s what she had to say to Jenelle Evans, “I know damn well u aren’t talking…..when’s the last time u mothered ur son? Pls trailer trash don’t start. Go keep sniffing coke and keeping showing ur two kids what a horrific parent u are. My mom told me to leave u alone bc ur not mentally stable! Good luck with ur life’ bye.”

Do you guys think the DeJesus sister made a mountain out of a mole hill? (Pun intended.) Or do you agree with what they had to say about Jenelle Evans?