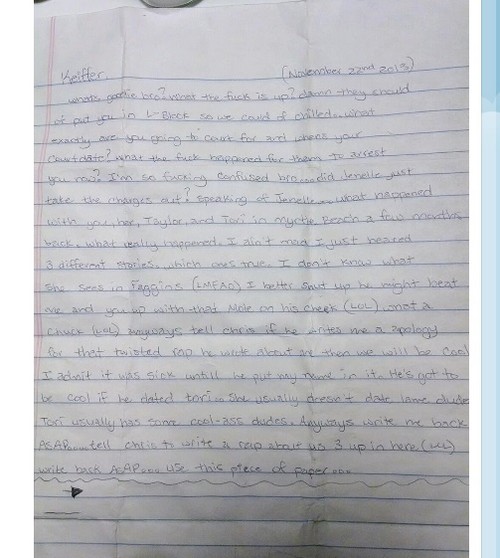 Teen Mom 2’s Jenelle Evans may have a new boyfriend, and is trying to put her past behind her, but her ex-boyfriend Keiffer Delp is not ready to forgive and forget. You most likely recognize Delp from his appearances on Teen Mom 2, and the multiple times he was arrested with Jenelle, and for assaulting Jenelle.

Keiffer Delp was bonded out of jail (where he was serving time for assault charges Jenelle Evans pressed against him) on December 8th, and he wasted no time before jumping on Twitter and outing Jenelle’s other notorious ex Courtland Rogers-who is also currently incarcerated. Keiffer claims that Courtland “tried to set him up,” while they were in jail together. Courtland sent Keiffer a letter, asking him about events that happened in Myrtle Beach between him and Jenelle. Another inmate admitted to Keiffer that Courtland was trying to get him to write about the events so that he could sell them to the tabloids. To add insult to injury Keiffer posted a photo of the letter Courtland wrote to him, and told all of his Twitter followers that Courtland had the “worst track marks (scars from injecting needles into your arms)” of all the inmates. He also wrote on Twitter that he saw Courtland Rogers eating cookies out of the garbage, while he was in jail.

Although Keiffer and Courtland have a lot in common, it doesn’t look like they’ll be starting an Anti-Jenelle Bromance anytime soon!