Jenelle Evans Kissed A Girl For Courtland Rogers – Did She Like It? (Photo) 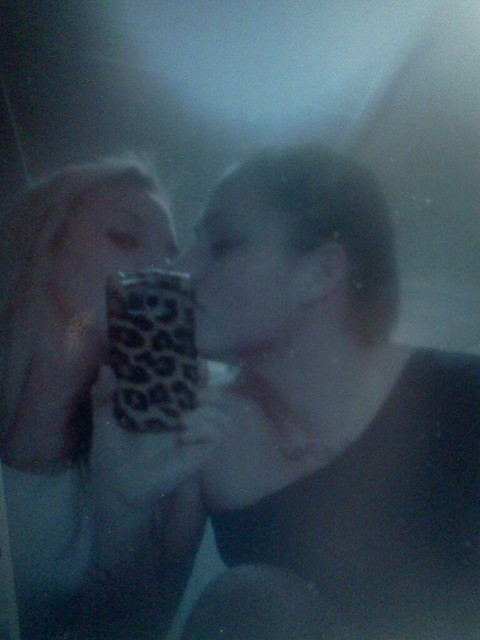 Teen Mom 2’s Jenelle Evans is no stranger to controversy, and enjoyed even more when photos of her kissing an unnamed girl hit the internet on Monday. The picture is a selfi, showing Jenelle locking lips with a friend. Jenelle got into a huge Twitter rant with friend Kaycee, who may be her only ally—except for her state appointed lawyer for all her past drug charges! Jenelle was quick to defend herself with a loud, “AND EVERYONE SAYS IM A BAD F*CKING MOM WOWWWWWWWWWWWWW HOLY SH*T.” But not all her Twitter followers were so eager to forgive the latest scandal!

When Jenelle’s friend suggested that the girl who posted the photo was just trying to “get famous off u,” both girls agreed the move was “trashy and gross.” Of course, this is coming from a mom who couldn’t choose between probation, or getting to see Kesha. One follower wasn’t willing to forgive Jenelle for the pic, reminding us: “let’s not forget those pictures of Jenelle the NAKED ones she had taken. Don’t try and turn the tables.” I totally agree! The internet is a powerful place, and Jenelle doesn’t seem to understand how these slutty pictures get around and affect our opinions of her!

But Kaycee had it all worked out, justifying that Jenelle “took PRIVATE pics that were for her bf NOT the whole world to c so hows that slutty??” By “bf,” she means husband Courtland Rogers, of course! While I totally get the argument, obviously the pictures are no longer private, and no everyone knows that Jenelle spends her free time taking sexy pictures for her possible-drug-addict-husband, instead of working to gain employment so she can establish a safe and stable life and win back custody of her son, Jace. I don’t see any room for forgiveness on this, but maybe I’m too harsh! Is Jenelle victim in all of this, for having her photos stolen and posted? Or  should she have been safe and never taken the pics?