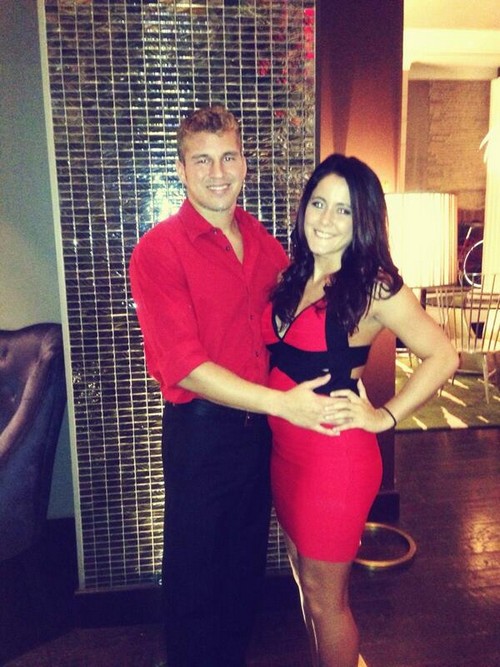 As Celeb Dirty Laundry told you first on Tuesday, Dec 10th, nearly 24 hours before anyone else, Jenelle Evans is in fact pregnant. Now Jenelle’s pregnancy is being confirmed my multiple sources.

About once a month pregnancy rumors about Teen Mom 2’s Jenelle Evans emerge, but this one may actually have some merit to it. It all started in October when Jenelle Evans posted a photo of herself with her current boyfriend Nathan Griffith. In the photo Jenelle looks like she is carrying a slight baby bump, her belly is definitely sticking out more than usual.

Last week Nathan Griffith posted a cryptic message on Facebook: “I love you Jenelle Evans and whatever you are doing keep doing it because you are keeping me around. I wouldn’t have it any other way especially the surprise you are giving in the future. I can’t wait for it and I can’t wait to see the outcome.” Nathan’s message could mean a number of things, but it also could mean Jenelle Evans is pregnant. “The surprise you are giving in the future,” sounds an awful lot like “the baby that is growing in your belly.”

Today The Real Teen Mom Talk released an exclusive story claiming that Jenelle Evans was indeed pregnant, and that they had a source at MTV backing them up. In the article they also claimed that Nathan will be heading to prison in January, and that Jenelle is currently filming her own reality TV spin-off. Whether or not the story is legitimate, Jenelle Evans’ reaction to the story pretty much confirmed the pregnancy rumors. Jenelle took to Twitter and stated “There’s no spin-off with me, and Nathan isn’t going to jail.” Not once did she say, “Oh and by the way I’m not pregnant.”

Between the photo of Jenelle’s bump, Nathan’s Facebook message, and the exclusive from The Real Teen Mom Talk, it seems pretty clear that Jenelle Evans is indeed pregnant.