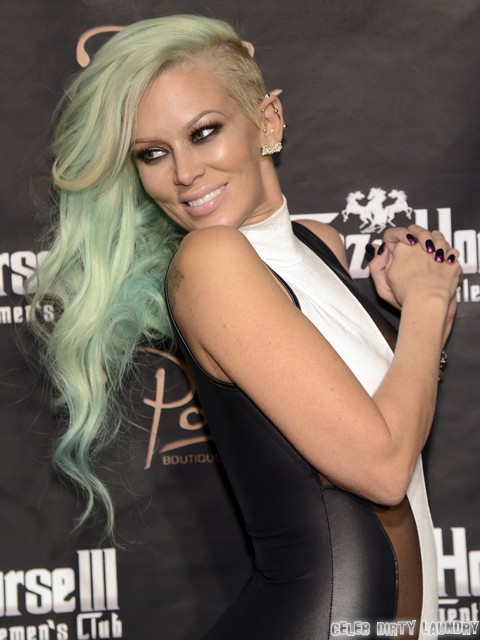 Jenna Jameson was set to celebrate her 39th birthday (which she started celebrating in March) at Heat Ultra Lounge in Newport Beach, CA but the night’s festivities did not go as planned. TMZ is reporting Jenna assaulted an unidentified person and was placed under citizen’s arrest by her victim. When police arrived Jenna was cited for battery but she was later released.

There are rumors that Jenna and Tito have broken up for a second time. The Las Vegas Sun is reporting Jenna’s new look (green highlights in her bleached blond hair and wearing  a cat suit with see through cut outs to her early birthday party at Crazy Horse III Gentleman’s Club) plus canceled and rescheduled media interviews fuel the rumors. Perhaps unhappiness and stress are causing Jenna to go back to what is familiar to her. Let’s hope this latest arrest doesn’t turn into a new habit ala LiLo and she can get it together once again. Jenna’s actual 39th birthday is April 9. Hopefully it will be a quiet day for her and her family.