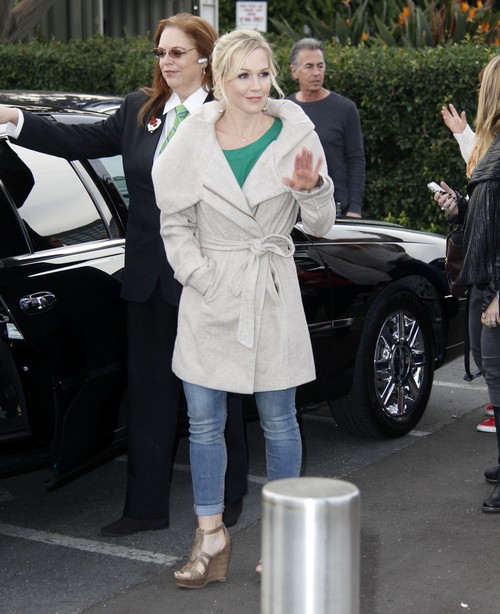 Jennie Garth never wanted to divorce from Peter Facinelli, and she’s been pretty vocal about that in the past. But has she decided to go one step further and humiliate him as revenge for forcing the split? According to the National Enquirer, Jennie is working on a tell-all memoir that will reveal a lot of secrets about Peter and their split, and apparently Peter ‘won’t come out looking good’.

The memoir is titled Deep Thoughts From a Hollywood Blonde, and a source tells the Enquirer, “Jennie is out for blood. She’s telling friends that she’s going to reveal the real story of why her marriage failed, and that Peter is not going to come out looking good. It’s obvious Jennie still has an ax to grind with Peter, and the book is definitely going to tear open old wounds between them.”

Well, of course she still has an axe to grind with him – she never wanted to split up in the first place! She was professional enough never to go into too many details on why the divorce occurred, and different sources lay the blame on both her and Peter. There are also many, many rumors that stated that Peter cheated on Jennie, and I don’t think that would be very surprising either.

Whatever the cause of their split, Jennie obviously has many unresolved feelings on the matter. And plus, whenever a Hollywood star is writing a memoir, it’s pretty much expected that there’ll be a section devoted to their love life. Considering that Peter and Jennie were married and it didn’t end well, expect to hear some ex-bashing in the book.

What do you guys think? Will Jennie get her ‘revenge’ on Peter by dissing him in her tell-all? Or will she remain professional and refuse to go in-depth into the subject? Let us know your thoughts in the comments.