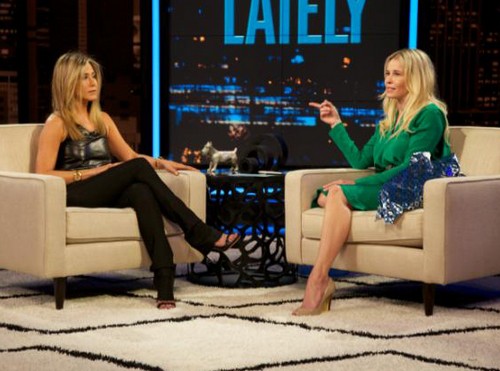 Jennifer Aniston and Chelsea Handler have been friends for a long, long time. However, according to Star Magazine, that’s not about to last much longer because they are supposedly ‘on the outs’.

Apparently, “Chelsea’s aggressive attempts to upgrade her celebrity friendships have caused a rift with Jennifer. Jen called Chelsea a ‘suck-up’ for begging for an invite to Sandra Bullock’s Hollywood Walk of Fame ceremony and hanging all over her. Chelsea doesn’t even know Sandra! Chelsea name-drops everyone she hangs out with, whether it’s Charlize Theron, Reese Witherspoon, Katie Couric or 50 Cent. Jen’s definitely pulled back from Chelsea.”

That being said, it does seem like Jennifer and Chelsea have been spending less time together lately. It could be due to careers and distance, but it could also be that they’re outgrowing their friendship. Chelsea and Jennifer initially bonded because their lifestyles were very similar, but they might be growing apart as their careers and personal lives start to take over.

What do you guys think? Are Chelsea and Jennifer ‘on the outs’ because Chelsea is too eager to make A-list friendships? Or are they just growing apart, as some people do when they get older? Let us know your thoughts in the comments.