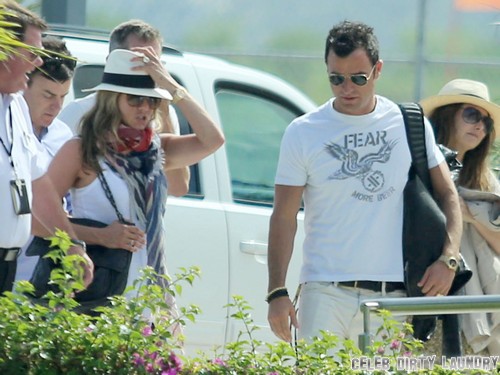 I think it’s really about time for everyone to stop feeling so sorry for Jennifer Aniston because she and Justin Theroux haven’t made it down the aisle yet. In the midst of all the “poor-Jen” talk a little of nugget seems to have been unearthed. It’s not that Justin is dragging his feet about getting hitched. Instead, according to the Sept. 9th print edition of National Enquirer it’s actually Jen who is stalling for time.

There has been years worth of wedding talk and baby fever surrounding Jen but believe it or not she’s not in a real rush to make all of those dreams happen. It seems that spending time with bestie, Chelsea Handler has done wonders for Jen and she has kind of adopted Chelsea’s attitude about creating the picture-perfect family, in other words, she no longer needs all of that. Jen finally realized that she’s quite happy in her relationship with Justin and she’s not really in a rush to change it up. It sounds like a case of not fixing what isn’t broken.

Let’s not forget that Jennifer doesn’t trust Justin completely and for good reason. Justin dumped Heidi Bivins as soon as Jen flashed her money bags and Hollywood connections at him.  Chelsea has helped Jen understand that Justin may very well be a bit of a gigolo gold digger.

Plus Jen was blindsided by her divorce from Brad Pitt and she is in no rush to put herself in a situation where she can be that gutted again. I guess she figures as long as she doesn’t marry then she’ll never have to worry about another divorce.

Do you believe that Jen is now the one with the cold feet? Sources claim that Justin would marry her in an instant if she wanted to do it, do you believe it’s true? Or do you think he is saying that because he knows that Jen isn’t ready so it makes him look better if he appears ready and willing? Tell us your thoughts in the comments below!