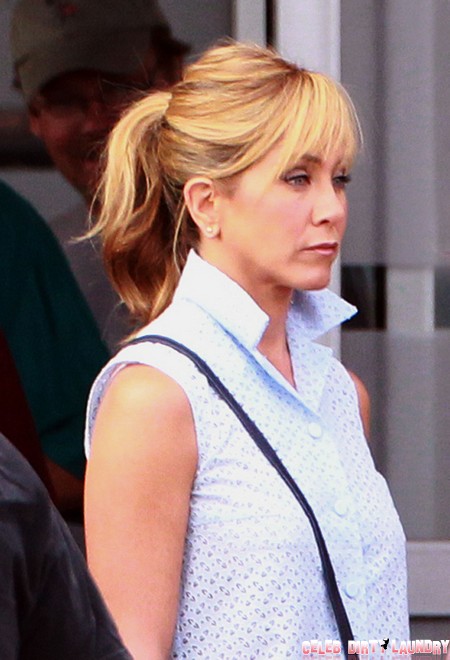 There was a little window of time when it looked like Jennifer Aniston might actually be getting her version of a happily ever after. She seemed to click beautifully with Justin Theroux and the two were heading for a nifty wedding. Now all of a sudden the plans are on hold. Initially it was said to be because of Justin’s heavy work schedule right now. That would be a smidgen believable if they weren’t choosing to live on opposite coasts!

According to the July 15th print edition of In Touch, Jen loves LA. She moved to NYC in 2012 to be with Justin but only survived three months. He then high tailed it to LA with her, but Justin hates the left coast. Now Justin is back east in the city that he loves (right near Heidi Bivens…) shooting a pilot for HBO while Jen chooses to remain in the couples Bel Air mansion alone.

Let’s see, he has work and she does not, so that would normally mean that she would join him in NYC even part time. Instead they are opting to lead very separate lives 3,000 miles apart. This sounds like a break before a full split to me. The wedding isn’t just on hold, they are clearly taking time apart to reevaluate their relationship. If Justin’s pilot gets picked up then he’ll be relocating to NYC for real and my guess is that Jen will most certainly not follow.

Do you think that Jen and Justin are inching towards the end of their relationship? Is there a realistic chance that the time apart will make them need to be together or are they both too stubborn to give up their lifestyles for each other? Tell us your thoughts in the comments below!