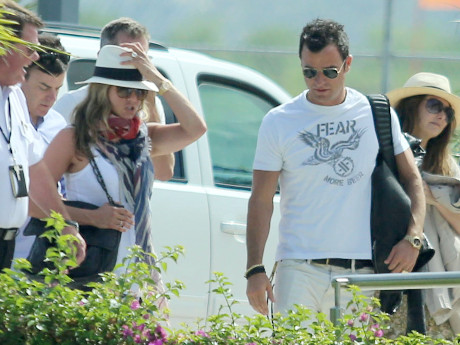 Jennifer Aniston is currently being accused of exerting her immense star power to make sure Justin Theroux‘s ex girlfriend, Heidi Bivens, stays the heck out of L.A. She doesn’t want him anywhere near her man! The report comes from Star magazine, which claims Bivens recently planned to move to the glittery hills of Hollywood to expand her stylist business; however, Jen wasn’t entirely thrilled about this idea and decided to take quick action.

The “insider” for Star told the magazine that “everyone knows everyone” in L.A. and that “Jen didn’t want to cross paths with her. She felt threatened by the thought of having Heidi in the same city,” says the Star source. “She was convinced that Heidi and Justin would reconnect.”

Honestly, while I love the thought of this much drama flying around between L.A. and NYC, I don’t think Jennifer Aniston could give a crap about what Bivens is or isn’t planning on doing. Jennifer has mentioned so many times how happy she is with Justin — and Justin seems to be happy as well, so it seems people are just trying to start a fire around relationship that is currently fireproof.

Now, we don’t think Jennifer would love it if Bivens moved in next door, but Jennifer is a smart lady and is well aware of the fact that she doesn’t own L.A. If Bivens truly wanted to move to L.A. I don’t think Jen would be the one to bar her from entering. What do you think about this story? Do you believe the drama? Think it’s real?