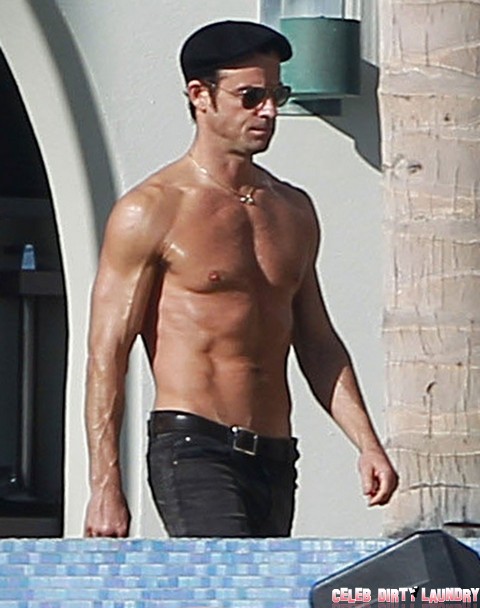 Justin Theroux and Jennifer Aniston make a cute couple, don’t they? She’s the attention whore and he’s the indie actor with the six pack. It’s a combo made in hell, especially since Aniston hates it when the shine is taken from her little piss puddle and given to someone else. (Hey, the girl’s got insecurities – we would too if someone as beautiful as Angelina Jolie stole our man…)

According to a latest Now magazine report, she wants him to pack that six pack in! A friend reveals, “She’s bored of the attention he’s getting for it. She doesn’t want it going to his head, so she’s told him to cover up.” No Jen-Jen! Don’t be like that! We know a million women (and men) who would give their left eyeballs to be with Theroux.

However, Justin’s six pack wasn’t the only source of Jen-Jen’s anger.

During their recent romantic break to Cabo San Lucas, Mexico, over the New Year, Justin allegedly phoned his ex, Heidi Bivens, during their time spent there. As we know Jen-Jen, she most probably flipped out, kicked him in the face, and broke a few cell phones in the process. According to a source for Now magazine, “Jen was cross because he hid it behind her back – but imagine if he’d pulled out his phone and called Heidi in front of her. All hell would’ve broken loose. He understands Jen has trust issues, but he’s frustrated that she’s projecting them on him.”

Yeah, so about that wedding… How long will their marriage really last? These two sound as dysfunctional as a gaggle of prostitutes at a séance. What do you think CDL readers? How long do you think these two will last? Do you think the cracks are already showing? Let us know your valuable and insightful thoughts in the comments below!