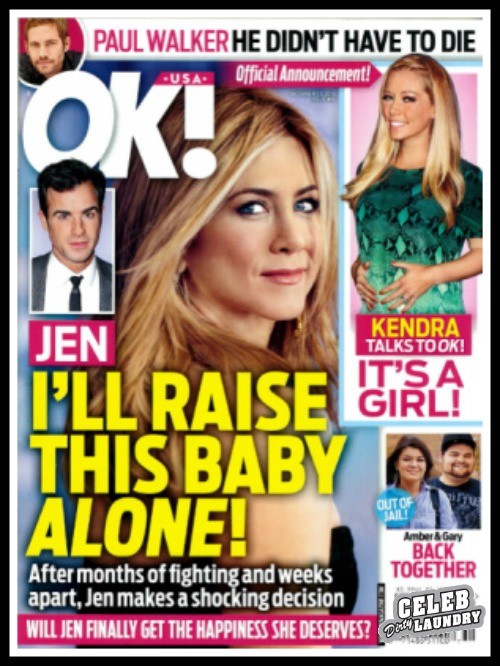 At this point, Jennifer Aniston‘s imaginary baby count is up to 25 for this year. According to OK! Magazine’s latest cover issue, Jennifer Aniston is pregnant yet again (!), and this time, she’s apparently vowing to raise her baby alone. Uh-huh.

According to the headline, after ‘months of fighting and weeks apart [from beau Justin Theroux], Jennifer makes a shocking decision‘. Apparently, this decision is basically to raise her imaginary baby alone, away from Justin. Then, a source in the actual article explains that since Jennifer and Justin have apparently broken up, Jennifer is determined to keep the baby away from Justin.

The source adds, “[Jennifer and Justin] broke up and the wedding is off; it happened over the long Thanksgiving weekend. Jen and Justin were apart for Thanksgiving, when he celebrated with his mother in Virginia and she hosted a part for friends.”

Despite OK!’s cover, it looks like Jennifer and Justin are finally fighting back against tabloid rumors. For the first time, Jennifer’s using sources to confirm that she and Justin actually did spend Thanksgiving together in her house in LA, despite all the rumors to the contrary. So even though the report claims that a moving truck has already helped Justin move out, I don’t think this Jennifer and Justin are done just yet.

Again, tabloids know that the words ‘Jennifer Aniston’ and ‘baby’ will sell tabloids, so you can’t really blame them for the title. But you have to blame anybody who buys this story, considering how many times Jennifer’s supposedly been pregnant and/or had babies in the last year. She’d be a medical marvel if the tabloids turned out to be accurate every time.