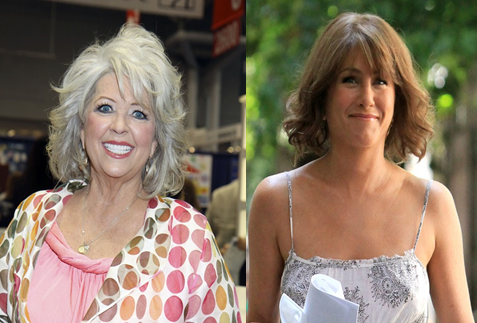 Remember last month when everyone went absolutely bonkers when Jennifer Aniston showed up on the red carpet looking bloated? We all presumed it was a sign that maybe just maybe she was finally expected a baby. Then there was talk of it being extra bloat from fertility treatments that were wrecking havoc on the actresses’ body. Now it seems that the answer is a whole lot more simple then all of that. According to the Sept. 9th print edition of Star magazine we all kind of forget that Jen is nearly 45 years old. You can work out like crazy but if you happen to be a woman creeping into middle age those pounds still can creep up.

Jen has gained an estimated 17 pounds in the last several months and it looks like she also has relaxed her workout schedule and just embraced her changing body. Also those close to the actress say that her fiance, Justin Theroux really loves the extra curves and keep his hands off of her so his extra attention might also be helping her to transition into a different body.

It’s funny how everyone seems to want to see Jen pregnant because for some reason we all think that will make her really happy. Instead we’ve learned this week that she might actually be happy right now, in this moment without a wedding ring or a stroller to push and several extra pounds instead. As for her wedding to Justin, it’s still on hold. Do you think that they will ever actually marry or will they instead end up keeping things exactly as they are right now? Will they stick it out and remain a solid Hollywood couple? Tell us your thoughts in the comments below!