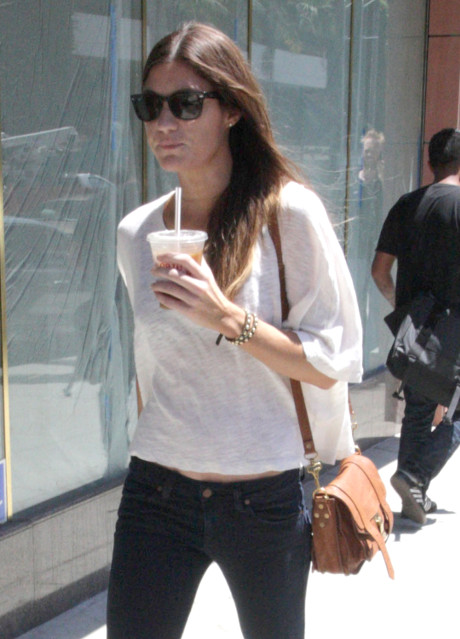 Jennifer Carpenter was moved to tears talking about her ex-husband, Michael C. Hall, at a Dexter farewell panel the other day. Jennifer and Michael, who ironically play siblings on the popular Showtime show, were divorced in 2011 after being together for several years.

During the event, Jennifer teared up when discussing her divorce, explaining, “Our marriage didn’t look like anyone else’s, and our divorce didn’t either, so…I said it before, just because the marriage ended doesn’t mean the love did. I’m crying. It’s an awkward thing to talk about your personal life in front of a bunch of strangers, but there’s nothing but love and respect [between us]. Nothing.”

Hmm. On the one hand, she could just be saying whatever most people say when their relationships hit a dead end – especially since she and Michael have had to work together afterwards. However, her claiming that their love never ended definitely raises some eyebrows – unless I’m mistaken, that’s not a common thing to say about your ex.

For his part, Michael shied away from making such declarative statements and instead stuck to, “I would say the fact that Jennifer and I worked through whatever was going on with us personally the way we did and maintained telling the story was never in question.It was always what we needed or wanted to do.”

Is there any chance of Michael and Jennifer reuniting in the future? Their chemistry on the show is fantastic, which is obviously a bit off-putting considering they are playing brother and sister. Obviously, it’s a loaded relationship, both on-screen and off-screen, but it definitely looks like the romance is one-sided from this interview.