Are Michael C. Hall And Jennifer Carpenter Back Together? 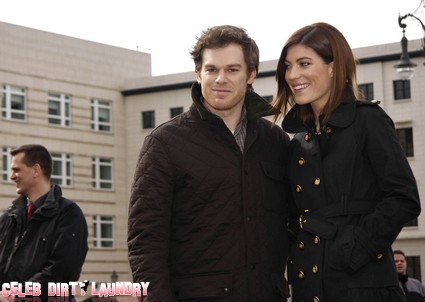 If appears as though the ol’ saying is true – a picture tells a thousand words.  Michael C. Hall and Jennifer Carpenter, who play brother and sister on the crime show Dexter, were photographed looking a little more than ‘just friends’ while out enjoying a stroll in Los Angeles.

Just two months after their divorced was finalized, are the two reconciling?  Good god I hope so.  Although they play siblings, the chemistry between the two is undeniable.  How could it now parlay off screen…for a second time?  Whatever happened between the two, I hope that the pictures and rumours we see and hear about are true.  Remember that just a couple weeks ago they were spotted together sharing a coffee, and they looked pretty close during the Golden Globes. Hmmm…interesting.

It was reported during the time of their separation that Dexter guest star Julia Stiles was responsible for causing a strife between the married couple, but none of that has ever been confirmed.  The couple went through a lot together before their finalised December 2011 divorce, with Hall battling and beating Hodgkin’s lymphoma in 2010.  Sources are quick to say that the two are just friends and co-workers.  Because that’s how I cuddle my co-worked on a day to day basis.