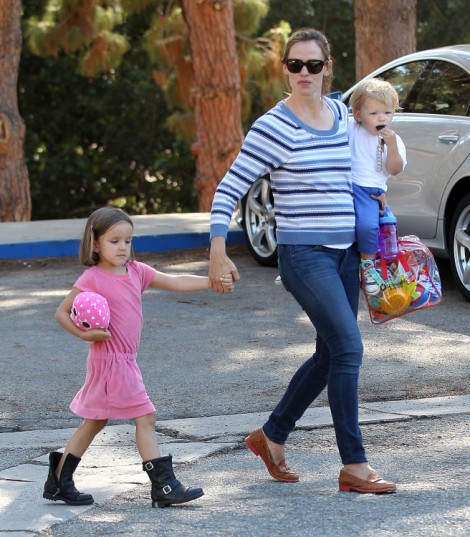 Is that a baby bump? Jennifer Garner’s wearing skinny jeans which never helps anyone but it does look like something’s going on there. It doesn’t help that she can’t keep her sweater down over her stomach while playing with her kids at the park. So what do you think? Is Jennifer Garner pregnant again? This would be her fourth with husband Ben Affleck. I feel like she just gave birth but I guess Samuel Affleck is 16 months so it’s not like we’re talking Irish Twins or anything. But man. Four kids under the age of 8. God bless her.

I thought she was done having kids though. I remember (was it around Oscar season?) that Ben was mouthing off about trying for one more and she was like “no way dude”. It looks like he got his way. I kinda get it. People like the even number thing and I’m sure there’s the added incentive of trying to give little Sam a brother to play with. Seraphina and Violet are cute as hell but having a brother is a big deal.

Now we just need Matt Damon to knock his wife up again. I want him to have a boy so bad because it would be so cute! It’s sad that I start off talking about Ben Affleck’s family but use it as a segue into Matt Damon’s. But Matt’s just so much more fun and personable and it would be so adorable to see him get a boy after four girls. Maybe Jennifer Garner’s news will give Matt and Luciana the strength for another try. But seriously I could see her going, “Aww hell to the no!” Some guys just push Xs and Matt Damon might be one of them.