BY Jeanne Adams on May 9, 2013 | Comments: one comment
Related : Casper Smart, Jennifer Lopex 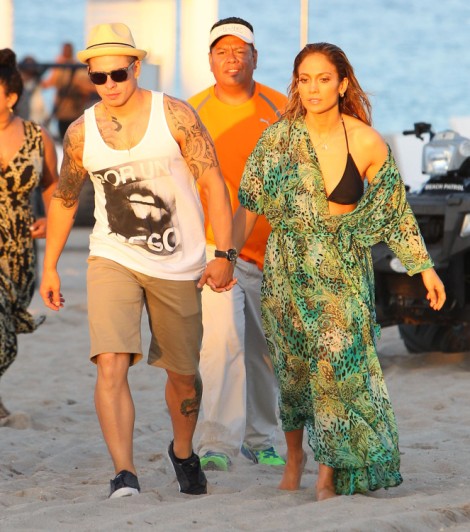 I haven’t written about this dude in forever. Partly that’s because he’s boring and partly because he’s gross looking with a massive tool face. Harsh? Probably. But after his newest antics, I’m allowed to be a little harsh this morning.

I woke up to pics of Jennifer Lopez’s boyfriend (maybe fiance), Casper Smart walking under two umbrellas held by two other people. Ugh. Jennifer, on the other hand, only used one umbrella person. They were on their way into an NYC radio station for Jen to promote her new single with Pitbull and I was immediately reminded of P Diddy. Remember when he used that Farnsworth dude to hold an umbrella around him in the sun? That didn’t bother me at the time. It’s P Diddy. Let him do what he wants. But this is Casper freakin’ Smart. What… the… shit?

But Jeanne! It’s not a big deal! It was raining! He’s wide and needed coverage! He didn’t want to ruin his suit! He wanted to look presentable!

But it’s his face! Look at that smug shit all of him. I can’t handle it. It’s too  much. It’s the sign of a back-up dancer being given the world and not being grateful. Have we ever seen other K-Feds-in-Training like Jessica Simpson’s baby daddy or Madonna’s boy toy dancers act like this? No. And you want to know why? Because they’re just happy to be invited to the party. They know it’s all about the women – the talent. Somewhere, somehow Jennifer convinced Casper he’s an equal partner in that relationship and that makes my stomach curdle. Can you imagine this guy if he actually had two legs to stand on without her? He’d be more insufferable than Gwyneth Paltrow and P Diddy combined.  Too much. Too much I tell you. Why is she attracted to that?

Did Jennifer create a monster diva? Casper “two umbrellas” Smart looks like he’s very comfortable with all that money and help. He knows her track record with husbands, right? Perhaps he shouldn’t put his feet up just yet…. But I’ve been saying that for years. What’s taking her so long to ditch this guy?