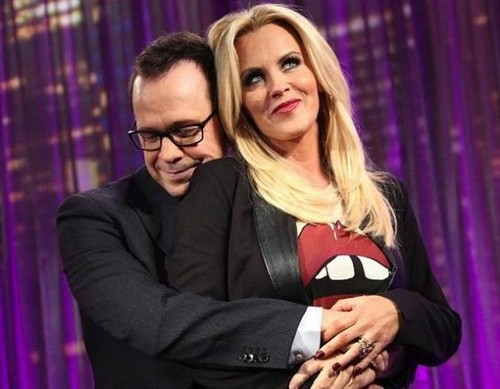 If you tuned in to Jenny McCarthy’s short lived VH1 talk show about 6 months ago then you may have seen the sparks fly as Donnie Wahlberg took a seat on her couch. The entire interview was so flirtatious that it had people speculating on whether or not these two were going to hook up once they were off camera. Jenny actually did give Donnie her phone number once the segment wrapped up and she expected a phone call to occur pretty fast.

Instead, according to the Oct. 7th print edition of GLOBE Magazine Donnie kept her waiting for weeks! By the time that Jenny’s phone finally rang she had written Donnie completely off. Of course she didn’t think the problem was her, instead she convinced herself that Donnie was either married or gay, otherwise he would have called! Instead Donnie just wanted to set the tone of taking things slow and according to Jenny things have been really great between them.

Before finally connecting with Donnie, Jenny was on her own and totally single for a full year and wasn’t really looking for a relationship at all. Now it seems the couple is actually a great match. Both have sons and each has a career on the rise. Jenny is the newest co-host on The View and Donnie stars as a detective on Blue Bloods.

Do you think that this is a real love match that will last for awhile or is it one of those that’ll burn bright and then fade out fast. Tell us your thoughts in the comments below!