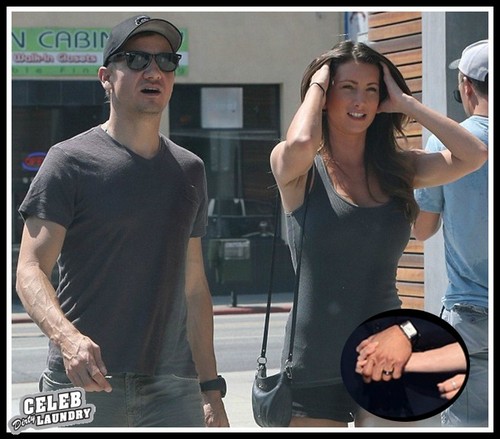 There’s not much known about Sonni Pacheco, Jeremy Renner‘s baby mama. In an unusual turn of events, Sonni has turned out NOT to be a famewhore, which means we haven’t gotten any ‘exclusive’ interviews from her or her ‘friends’ in any tabloids. Considering that she and Jeremy Renner just had a child a few months ago, Ava Berlin Renner, it’s unusual that she’s managed to stay so undercover.

Anyway, kudos to both of them on that. According to earlier reports that were circulating after Ava was born, Jeremy and Sonni were reportedly not dating, but she was staying in his house. It’s an unusual arrangement, but one that seemed to benefit both of them – they could raise the kid together, and they wouldn’t have to worry about distance. However, then we started hearing rumors that since Sonni had moved in, Jeremy hadn’t really been dating anyone else – unusual for a man who’s got a bit of a reputation as a ladies man. So were he and Sonni dating? Did they just get back together as they bonded over raising their daughter? Did they get together out of convenience?

Whichever one it is, a new exclusive from Lainey Gossip states that Jeremy and Sonni might actually be married (!). Lainey received an anonymous tip about Jeremy and Sonni getting married recently because Sonni’s US visa expiring. See, we know so little about her – I didn’t even know she wasn’t a US citizen.

Anyways, Lainey does state that none of her other sources were able to confirm, but she also pointed out that when Jeremy presented at the Hollywood Film Awards last night, he was wearing a ring. When you look at all of his photos over the past couple of months, that ring is missing.

So is Jeremy Renner married to his baby mama Sonni Pacheco? Although it’s not confirmed, all the evidence certainly points in that direction. Let us know your thoughts in the comments.