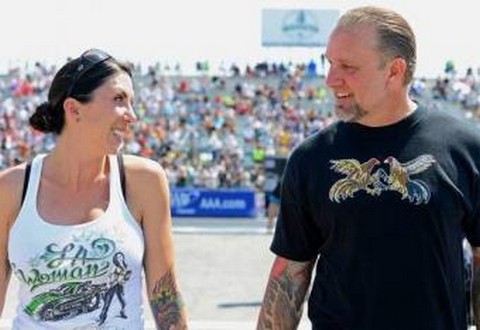 There are douche bags and then there’s Jesse James.  I’m sure you remember that this is the dude who infamously cheated on then-wife, Sandra Bullock with a handful of women about 4 years ago. Once one side dish was revealed his a’ la carte menu became public knowledge and Sandra divorced him as fast as her ink pen would allow her to sign the papers.  He has moved on with lots of different women, but on March 24th he tied the knot with Alexis DeJoria, a drag racer with a billionaire daddy.

On the off chance that Jesse wasn’t just in it for his new wife’s money, he sure is now. Alexis reportedly wants a baby and at first it was an idea that Jesse didn’t even want to discuss. He already has three kids with various women and certainly wasn’t looking for baby mama number four. At least not until millions of dollars were dangled in front of him.

According to the April 15th print edition of Star Magazine once Jesse saw the dollar signs dancing in front of his eyes it was hard to turn the offer down.  He figures he can suffer through a newborn crying and dirty diapers if the price is right- and apparently it is. He also claims to feel like he missed out when Sandra adopted baby Louis. It was an adoption that they had planned on doing together until his cheating caught up with him. Jesse felt bad that he wasn’t going to be a part of the boys life. He figures if he was able to open his heart to the idea of adopting Louis then maybe he can wrap his head around another baby after all.

Isn’t it funny how money gives people clear perspective? Is Alexis nuts to have a kid with Jesse, especially considering his track record? Tell us your thoughts in the comments below!