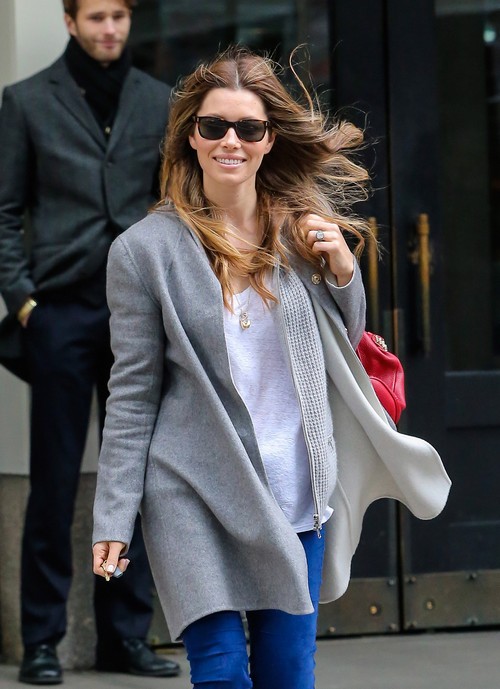 Although Justin Timberlake made headlines with his presence at the AMA Awards last night, Jessica Biel was nowhere to be seen. Now, that’s not technically all that surprising, considering Justin probably only lets her out of the house every so often. Joke, I kid. But really, the American Music Awards are a BIG deal, and it actually is a bit odd that Jessica didn’t make an appearance, especially as she usually takes every opportunity to remind people that she’s Justin Timberlake’s wife.

However, with recent reports alleging that Jessica’s pregnant, her absence could just be due to wanting to avoid stress and unnecessary speculation. A report from the National Enquirer earlier this week stated that Jessica was using Lance Bass to get Justin to agree to having a baby, with a source explaining, “Justin keeps telling Jessica they’ve only been married for a year, and they should enjoy the time they have together before they rush into making babies. But Jessica reminds him they’ve already been a couple for six years — and she doesn’t want to wait anymore. Lance told Jessica, ‘I’ve known the dude for almost 20 years, and if you stay on him, I swear he’ll cave.”

The source then adds, “[Because of this, Jessica has] been turning down new acting jobs, apparently in preparation for parenthood. Jessica is determined to work on having a baby after Justin is off the road. And thanks to Lance, she knows she’s doing the right thing in not letting the issue slide.”

What a weird person to turn to for advice. If this is true [which is highly doubtful], who knew Lance Bass was so influential in Justin’s life? Plus, isn’t it kind of sad that Jessica has to ‘beg’ Justin to have children? Apart from that, this whole thing of Jessica ‘turning down jobs’ is a bit hilarious, only because the last time she even got a job offer was months and months ago. The girl ain’t in much demand in Hollywood right now, so it’s possible that she’s now focused on getting pregnant.