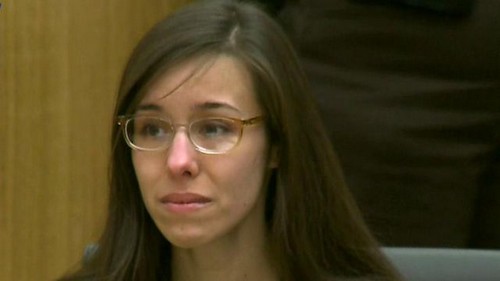 Jodi Arias’ guilty verdict wasn’t much of a surprise for the general public. Her stoic and apathetic attitude painted her as a villainous murderer suffering from the proverbial reus sine paenitentia (defendant without remorse). Less than half an hour after the jury announced a verdict of first degree murder, Arias jumped on the infamy bandwagon and opened up about her trial in an exclusive interview with FOX 10 News, which showed her almost psychopathic personality in all its glory.

“The worst outcome for me would be natural life, I would rather die sooner than later. Longevity runs in my family and I don’t want to spend the rest of my natural life in one place. I am pretty healthy, I don’t smoke, and I would probably live a long time,” says the convicted murderer.

On Thursday, the jury of eight men and four women that found her guilty of first degree murder, will return to the Phoenix courtroom to decide whether Arias will receive the death penalty or life in prison. However, the possibility of death by lethal injection does not seem to affect Arias in any way.

She explains, “I said years ago I’d rather get death than life and that still is true today. I believe death is the ultimate freedom, so I’d rather just have my freedom as soon as I can get it. I don’t know that I have a direct message for the jury. I prayed constantly for every single one of them and that was the jury that was brought to me, that is the jury I was meant to have.”

“I think I just went blank… I just feel overwhelmed. I think I just need to take it a day at a time. It was unexpected for me. There was no premeditation on my part,” she explains. “I didn’t expect the premeditation. I could maybe see the felony murder because of how the law is written, but the whole time I was fairly confident that I wouldn’t get premeditation.”

She also berates herself for not going to the Mesa police department when she was in the desert with Travis Alexander’s blood on her hands. “I don’t know but it would have been the right thing,” she states. Regarding Alexander’s family, Arias hopes “they are able to find peace” in light of her conviction. “I don’t think they will ever find the peace that they would like. But maybe they will be able to find great peace now, or some semblance of it and move on with their lives and remember their brother the way they want to.”