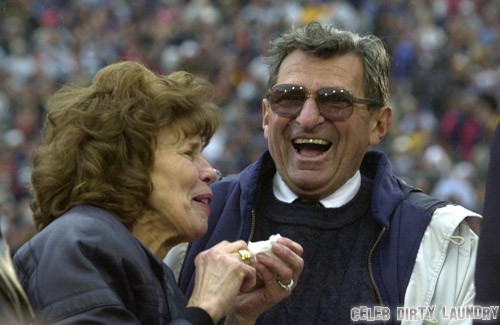 Joe Paterno’s wife Sue is still taking to his defense with regard to the whole Jerry Sandusky Penn State sexual abuse scandal. Can’t she just admit that Joe was part of some grand scheme to cover up the fact that Jerry touched little boys and her husband had some knowledge of that fact? This whole situation is so gross and she was better off just not bringing it up.

Joe passed away on January 22, 2012 and that was way before he could be indicted with any charges with regard to the sex abuse scandal that involved Penn State. Jerry is spending the rest of his days in the slammer after being convicted, but apparently Sue Paterno believed her husband was not at fault. Ugh. RadarOnline has the details:

In both a letter she sent to all the former Penn State students who played football during her husband’s tenure, and in an interview with Katie Couric set to be broadcast on Monday, Sue called Joe “the moral, disciplined and demanding man you knew him to be.”

Sue is fighting back against the allegations made against Joe in the wake of the Jerry Sandusky sex abuse scandal. Heading an investigation commissioned by the University following the conviction of assistant coach Jerry Sandusky on 45 counts of child sex abuse, former FBI Director Louis Freeh found that Paterno and other top school officials showed a “shocking disregard for child victims” as they prioritized covering up the scandal.

“Mr. Freeh could not have been more off base in his assessment of Joe,” Sue said in her letter.

The Paterno family launched their own investigation into what Joe may have known about Sandusky’s activities, and are issuing a report on their findings on Sunday.

Are you interested in what the Paterno family has to say? Are you of the mind that Joe knew what was going on and that the scandal went way up the Penn State ladder? Hit the comments and let us know your thoughts.