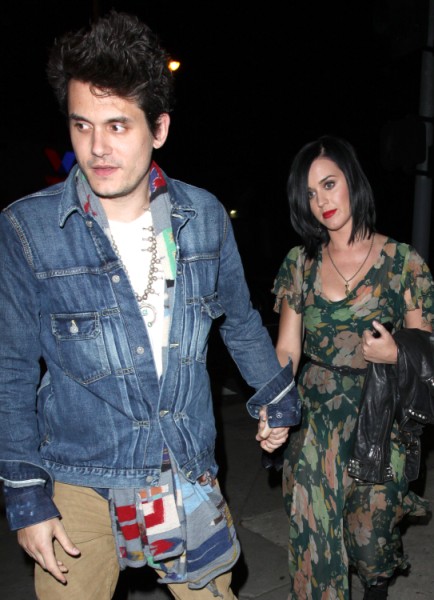 Surprising? No, of course not. It’s John Mayer. You could have told me he was cheating with ten other girls and I wouldn’t have blinked an eye. You remember a couple days ago when I said that Kris Humphries must be a gullible dumb ass when it comes to trusting people? Throw Katy Perry in that category as well. She’s been burned twice now by this dude. Hopefully she’s finally learned her lesson. I guess if we hear a new song called “Three Time’s A Charm” we’ll know for sure.

Although I don’t see how she could even consider a reconciliation after these new claims. According to Bohomoth, the John Mayer/Katy Perry split happened because he was all about having women on the side during the relationship and told them all he was just fooling around with Russell Brand’s ex for publicity reasons before his world tour.

I have no idea if that’s true but I always tend to believe the worst when it comes to that guy. The fact that ultimately John Mayer used Katy just sounds right. He used Jessica Simpson for sex and publicity too. Remember that Playboy interview? There isn’t much worse than that. And I’d even debate that he used Jennifer Aniston for publicity as well. Although knowing Jennifer, you can probably assume they used each other.

She doesn’t deserve it but I feel for Katy. I know! Slap me! She knew what she was getting in to – especially the second time around – but she seemed really into him. Right? She was in love and something like this just sucks. She’s probably too far in it to see the silver lining though. This is actually great for her – more than great. Now she can move on with a normal dude who will probably treat her much better. Sigh. Too bad Russell won’t take her back. Ugh, how do you go from Russell to that? Maybe she should just stay single for awhile. You can’t be that close to Mayer for that long without having some serious soul searching to do.

Do you believe John Mayer cheated on Katy Perry? Should we all give him the benefit of the doubt or is his reputation just too much?