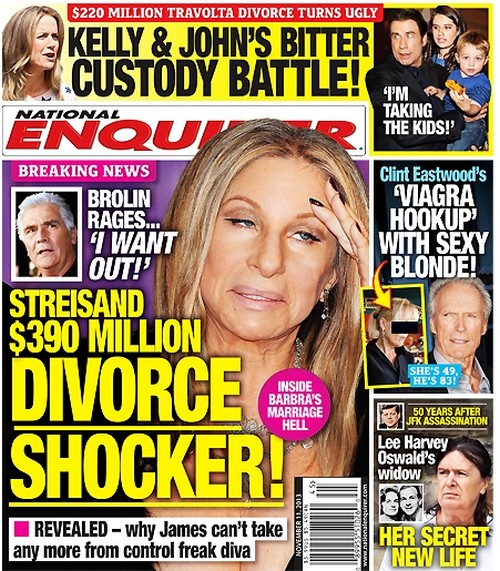 We have been telling you for months that the sham of a marriage between Kelly Preston and John Travolta is on very shaky ground. She has endured numerous lawsuits, rumors and insinuations because John can’t seem to keep his junk in his pants around young, attractive men and seriously wants out. Kelly has told friends in recent months that she believes that the marriage is doomed. The only thing that seems to have kept her still in it is the fear of losing her kids, Benjamin and Ella Bleu in a custody battle.

According to the Nov. 11th print edition of National Enquirer John is indeed threatening to clobber Kelly in custody court. I’m not sure exactly how he thinks he can do it unless he thinks that the weight of his name will be enough to secure custody. The reality is Kelly pretty much gave up her acting career in order to take care of her family and in normal life she would be a lock for primary custody of the kids.

Supposedly Kelly’s friends are worried about her sanity because she feels like her life is completely hopeless. She is stuck with John, basically existing as his beard on a good day and she sees no real way out. Could John, who has always presented himself as such a nice guy really turn into a monster in divorce court? Would he really make things absolutely awful for Kelly and the kids? Do you think that there is any love left between these two? Was it ever there in the first place? Did Kelly really believe that she married a straight man or did she agree to this marriage with her eyes wide open? Tell us your thoughts in the comments below!