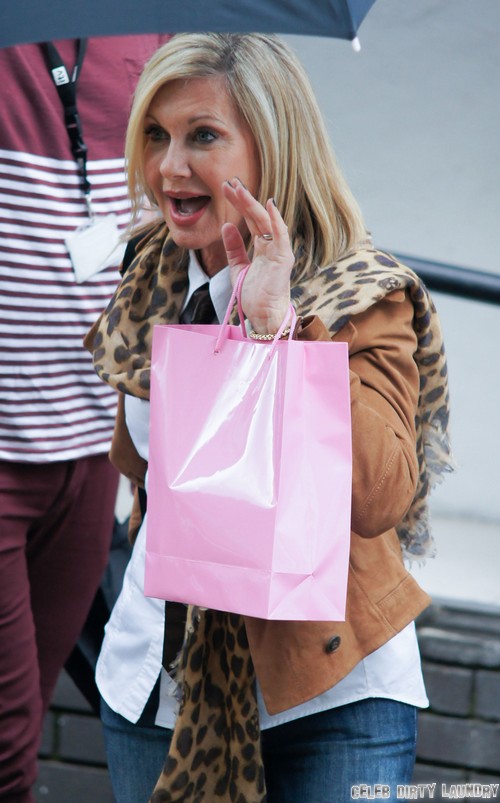 We all know that the pressure on Hollywood actresses to retain their youthful looks is ridiculous and the majority turn to some sort of procedures to help turn back the aging process. Olivia Newton-John is one of those actresses that shot to fame while in her twenties and looking super hot. Since her spin as Sandy in Grease 35 years ago Olivia continued to look absolutely amazing until recently. Like a bunch of actresses before her Olivia has become obsessed with plastic surgery, Botox and other fillers. The end result has left Olivia’s face distorted and plastic looking.

According to the Sept. 30th print edition of National Enquirer Olivia’s daughter enlisted the help of old friend, John Travolta to try and get through to her mother. The two have been close friends since filming Grease and apparently John is able to get real with Olivia in ways that other people can’t. The plastic surgery topic is so touchy that even her husband, John Easterling won’t bring it up.

Supposedly John lovingly pointed out that Olivia’s new-found obsession has gotten out of control and that rather than preserving her looks she is instead destroying them. Olivia didn’t make any promises about stopping but she did say that she would consider John’s concerns. Have you seen recent photos of Olivia? She hardly looks like the same person! Do you think she will take John’s advice and slow down on the injections? Or has it truly become an addiction? Perhaps she originally went to far in the hopes that more procedures would correct the damage that had already been done. Tell us your thoughts in the comments below!