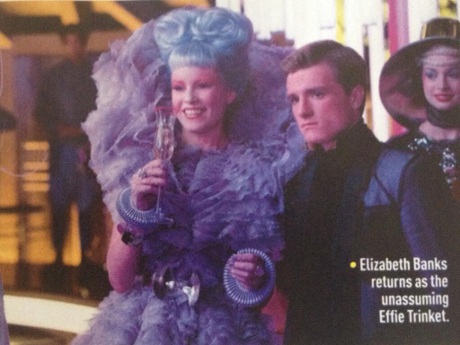 Even though ‘The Hunger Games: Catching Fire’ is still months away from release, Lionsgate has already started building anticipation for the movie. They’ve already released a well-received first trailer, and they got Jennifer Lawrence, Liam Hemsworth, Sam Claflin, and director Francis Lawrence to promote the film and its sequels during Cannes. Now, a new still has released via Empire Magazine, in addition to snippets from an interview with Francis Lawrence.

The still isn’t anything extraordinarily revealing – just an image with Josh Hutcherson as Peeta Mellark and Elizabeth Banks as Effie Trinket. The duo seem to be at President Snow’s Victory Tour party in the Capitol, and while Effie’s holding a drink and looking cheery, Peeta’s clearly worried about something. Fans of the series who’ve read the book know that there is a LOT to be worried about from Peeta’s point of view during this moment in the story, but we won’t give anything away.

Director Francis Lawrence also spoke to Empire Magazine about the higher stakes in ‘Catching Fire’ as opposed to ‘The Hunger Games’, explaining, “Everything opens up in this one … I think that without the second and the third book, the first movie would feel like a relatively small story, but the mythology opens up and the stakes ratchet up. You realise that this is about so much more than one person and that a whole country and a rebellion and loads of people’s lives are at stake.”

He also talks about some of the important topics that the books and movies manage to touch upon, explaining, “One of the great things about all the books is just the theme of the consequences of war. All these people, and they how it all in different ways, have some form of PTSD, and the ones that you get to know, you start to see the cracks in their veneer. And once we got into the arena – ours is tropical so the geography was wildly different – it was easy.”