Julia Roberts Talks about having more Children, Dolly Parton Explains why Motherhood WASN’T for Her! (PHOTO) 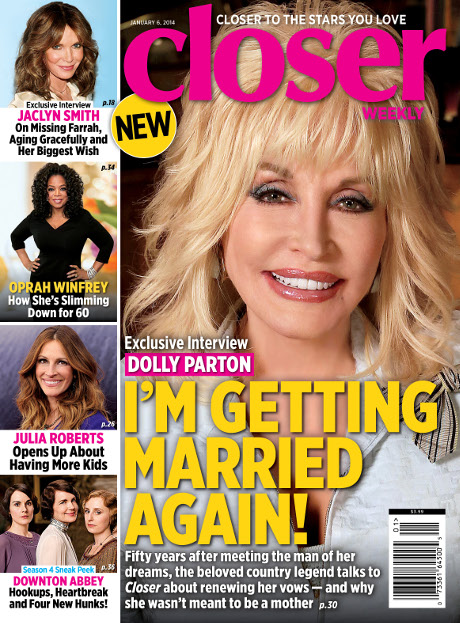 In the January 6th edition of Closer Weekly, Julia Roberts opens up about the possibility of having more children and Dolly Parton, who’s coming up on her 5oth wedding anniversary, explains why motherhood was never in her cards. The headline reads, “I’m getting married again — Fifty years after meeting the man of her dreams, the beloved country legend talks about renewing her vows and why she wasn’t meant to be a mother.”

Approaching a fifty year wedding anniversary is special and and exciting for any couple, and it’s especially cool to see a celebrity reach that epic milestone. On May 30th, 2016, Dolly Parton and husband Carl Dean potentially plan on celebrating the anniversary by renewing their vows. “We’ve talked about that — we might do it all over again!” she says. “Another big wedding, where we have family and friends.” She adds that the big day would “probably be at our big old plantation home. We love it there.”

This edition of the magazine also includes some great spoilers and sneak peek info regarding season 4 of the critically acclaimed British television series Downton Abbey. The juicy headline reads, “Hookups, heartbreaks, and four new hunks.” Oprah also reveals how she plans on slimming down as she approaches age 60.

Make sure to pick up your copy today! Let us know if you have any thoughts on Julia Roberts having more children, Dolly’s 50th, or the Downtown Abbey season 4 “hunky” hookups.