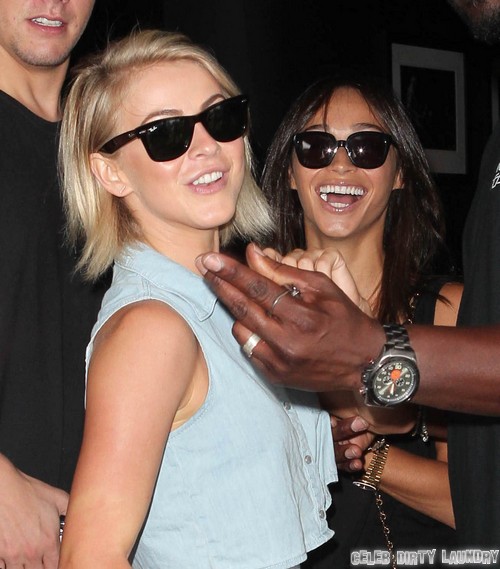 According to a new report from Life & Style magazine, Julianne Hough’s new boyfriend, Oscar winner Ari Sandel, might be ‘bad news’ for her. According to a source, Ari has quite a reputation among the ladies, which is very different from Julianne’s ex-boyfriend, Ryan Seacrest.

A source explains, “[Ari] is a ladies’ man. He dates and goes out with so many women, he’s such a player.”  The source adds that they don’t think Julianne should be thinking of an exclusive relationship with Ari, and she’ll eventually get her heart broken. They explain, “I doubt she will be the girl who makes him settle down. Girls have always been attracted to him. So, unless Julianne is different than the tons of other girls he dated…this probably won’t last.”

Well, Ari is an Oscar winner. If there’s one thing that women in LA seem to flock to, it’s established people in Hollywood. Most of these women are probably aspiring actresses who think that they will be able to get contacts if they hook up with him. Since Julianne is more established than that, she could genuinely be looking for a relationship. But if these rumors are true, he’s not looking for one.

However, I have a feeling that Ari will be sticking with Julianne, even if he normally doesn’t do long-term relationships. Why? Because he’s getting more publicity in the press than he’s probably ever gotten before. And if there’s one way to get more jobs in Hollywood, it’s to build buzz and establish a name with the public. If you have to do that by dating a starlet, so be it.

What do you guys think of Julianne’s new relationship with Ari? Let us know your thoughts in the comments.