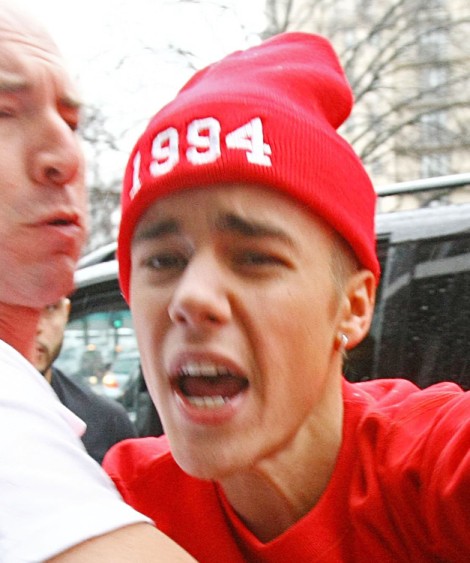 Justin’s Bieber’s ‘worst birthday ever’ has stretched into weeks as TMZ is reporting that the young pop superstar is under investigation for assault. A male neighbor of the Biebs claims that he and the ‘Boyfriend’ singer got into an argument around 9 a.m. which then turned physical. The neighbor told police that Justin initiated the fight.

“L.A. County Sheriff’s spokesperson Steve Whitmore tells TMZ … the accuser told deputies Justin made physical contact with him and he has filed a battery report. He also claims Justin threatened him.”

The site also reported that Justin’s team has pushed back against that claim – what a surprise – according to those stooges Justin has never done anything wrong – they even denied he smoked weed after pictures proving otherwise hit the web. They naturally insist that Beiber is the innocent party.

“Sources connected with Justin’s security tell TMZ … the neighbor came on to Justin’s property and began screaming that while Justin was away (overseas) there were people at the house throwing loud parties.”

“Our sources tell us Justin told the man to get off his property… but they insist Justin did not have any physical contact with him.”

TMZ now has the rest of the story: One of Justin’s neighbors tells TMZ … the argument between Bieber and the accuser was NOT over a party … it had to do with a Ferrari.

We’re told Bieber had the car delivered to his home last night on a flatbed truck … and this morning, he was racing the vehicle up and down the streets.

Neighborhood sources tell us … the neighbor was furious about the deafening noise AND felt Justin was endangering the community by tearing through the streets at breakneck speeds.

We’re told the neighbor went over to confront Justin about the situation … and that’s when the two sides got into a screaming match.

The police will investigate and give due process to these claims, but the mere allegation is just another black eye on Justin’s eroding reputation. These incidents that he finds himself involved in are becoming more frequent. After a certain point, your handlers, like Scooter Braun, can’t blame it on the paparazzi, the man in the moon or your black rapper friends. The problem is you Justin.