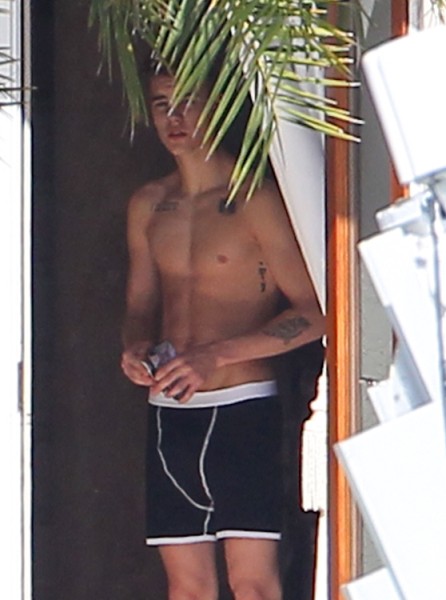 Justin Bieber recently told Billboard magazine that he’s not currently in the happiest place he’s ever been in since the Selena Gomez split but he seems to be doing his damnedest to put a smile on his self-indulged face.

Case in point – the last night of his US Tour in Miami yesterday. Justin gamely posed for fans but looked to be feeling a young girl’s boob up while he kissed her cheek during a picture. You’ve got to see her face! She’s like, “… um… OK… I guess this is how it’s done.” Poor thing. And now Justin Bieber’s groping her all over the internet. Nice Bieber, way to be a douche. The pic was posted on Justin’s fan club website BieberFever.com but was later pulled – for his benefit, not hers, I’m sure.

So another PR screw up for the wonder boy. First we had the pot shots and then the verbal (and maybe spitting) nastiness against the radio host and now a booby grab. I’m telling you, this has 2007 Britney Spears written all over it. For those of you who think Bieber is going to play the Justin Timberlake role in his break up, think again. Bieber is all Britney bitch because I’m feeling a meltdown. Selena Gomez will move on no problem. Hasn’t she already been seen holding hands and eating ice cream with co-stars or something? She’s about to have some fun with men taller than her who can grow facial hair. Justin might pretend he’s having a blast and grab some more boobs and even latch on to a Kevin Federline of his own but it won’t be the same.

What do you think of the Justin Bieber/Miami exploit? Was it an honest mistake? I mean, come on, can’t Justin Bieber grope a fan in front of a huge crowd without lame people like me making a huge deal out of it?