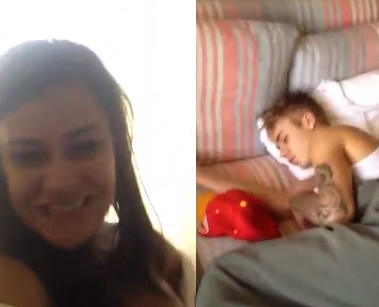 By now you’ve probably all seen the video of the woman who taped Justin Bieber sleeping. After Justin’s numerous Brazilian shenanigans and hooker scandals, everyone assumed that this woman was a prostitute. Well, as it turns out, she’s not (at least that’s what Bieber’s camp is saying). Apparently, she was just a random, creepy partygoer Justin had invited over to his rented-out Rio home the night before. And, naturally, she decided to videotape Bieber in all his sleeping glory.

TMZ reports, “Justin had rented a home outside of Rio to stay at during his concert in Brazil. After his show, JB threw an after-party and invited roughly 50 people. At some point during the shindig, Justin fell asleep on a couch and one of the partygoers shot footage of the singer sleeping.”

What do you think about Justin Bieber turning into a total crazy man while in Rio? Do you think someone needs to intervene and get him under control before he totally destroys his career? Let us know your thoughts on Justin Bieber in the comments section below — and don’t be afraid to take a firm stance: You’re either FOR or AGAINST the Bieber. Please, let’s not be wishy washy now!