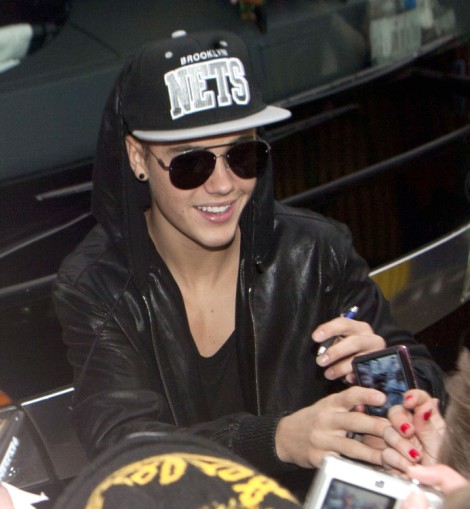 Hugh Hefner has got to feel old. How can you not when Justin Bieber is running his baby meat up against your bunnies and eternally adolescent-looking Selena Gomez is going to your parties? I guess you can’t say the man doesn’t evolve with the times….

So let’s get to Justin first. He’s continuing his European Tour of Doom and Shame and just performed in Cologne, Germany. Apparently he was feeling a little  lonely so he invited some Playboy Bunnies, fresh with their ears and tails in tow, to join him on his tour bus. They stayed for about an hour and then left. I wonder if their ears were wilted in shame on the way out. But that wasn’t all. The bunnies couldn’t get enough of the Biebs and showed up at his hotel room the next morning. His bodyguards/booty call managers spied the girls on the street and let them into the hotel where they stayed for two hours. Gross. These chicks know he’s not asking them up to talk, right? I’m assuming the language barrier could be an issue? Of course they know all of this. I get screwing a rock star but I will never get screwing Justin Bieber. Sorry.

Naturally Bieber’s twitter is blowing up over the whole Justin Bieber/playboy bunnies story because he’s such a baller. But could it all be one big message to ex-girlfriend Selena Gomez?

She and Vanessa Hughens have just been invited to party at Playboy! Selena Gomez got a tweet from the Playboy mansion telling her to come on down next time Hugh hosts one of his famous shin digs because Hugh was impressed by their acting (and probably their tits) in the movie, Spring Breakers. Should they feel a little perved out or flattered? I’m not sure.

So is this one big coincidence or a conspiracy? I’m going with conspiracy. I’m willing to bet Justin spends just about all of his time trolling Selena’s twitter and fan pages so he knows what’s going on. It’s just too big of a coincidence and Justin is just too pathetic. He’s basically telling her he can get anyone he wants – even not so hot playboy bunnies halfway around the world. Two claps for him. Hopefully she realizes he’s still pathetic. Rule No. 1 – if you want to make your ex-girlfriend jealous try to find hotter girls.