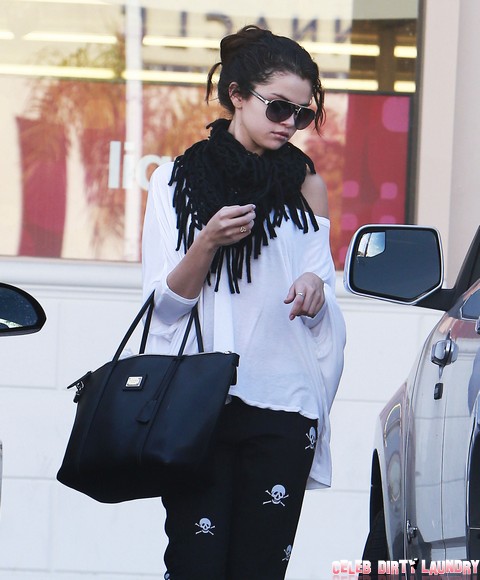 When is Justin Bieber going to realize that his life with Selena Gomez is over? When will he see the shards of his life on the red carpet of public opinion? According to Celebs Gather, Bieber is going all Fatal Attraction up in this joint (no pun intended) He wants Gomez back, and he will do anything to have her.

According to a source close to the situation (we think the source is actually a fly on the wall with a loudspeaker – we’re weird like that), “Selena and her mother are super close, and she doesn’t want Selena held back by Justin and all his drama. Selena has cut off Justin. She told him they can remain friends but she needs space for a while to get over him fully.”

In Taylor Swift terms: We are never, ever getting back together!

Celebs Gather reveal that “Selena’s parents were especially relieved that the two had broken up when they learned about Justin’s recent pot smoking incident.” You know about the pot incident, don’t you? You don’t? Well, the Bieber was snapped smoking a joint with a bunch of friends just days after a paparazzo – who was indirectly killed by Bieber’s car – revealed that Bieber was spotted smoking marijuana earlier in the day. This smoking scandal sent smoke signals to Bieber’s fans and a hoax was started up on Twitter called #cut4bieber. The sweet smell of weed is still clinging to Bieber, however, as he hasn’t been able to shake the damage this incident caused his career and public image.

Ultimately, Bieber needs to deal with the fact that Gomez will never, ever take him back. They might remain as friends, but that’s about as far as that relationship will go.

What do you think readers? Do you think they should get back together? Let us know your thoughts in the comments below.