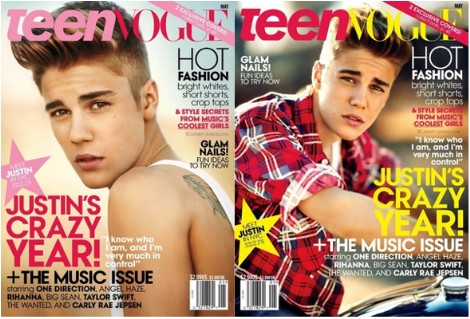 This is a huge pet peeve of mine. I can’t stand hypocrites who hide behind religion. It drives me BANANAS! I grew up super religious – not fundamentalist or anything – but it was a part of life at home and at school and basically everywhere until I went to college so I’ve seen a hypocrite or two. They do and say dumb shit Monday through Saturday but then they go to church and all is forgiven! They can judge YOU and whitewash over their issues because they sat in a pew for an hour a week. That’s Justin Bieber to me. Whenever times get tough he never acknowledges his problems. He never comes out and just says “Look, my head isn’t on straight right now. I just need to get it together. I know I’m not making it easy.” No, he turns to God and then blames the haters on the internet. No accountability.

This Justin Bieber/Teen Vogue interview couldn’t have come at a better time. His reputation needs it. Here are some of the better excerpts:

On social media: “My Twitter is really nice. I have so many fans that I rarely ever see a nasty tweet. I don’t read YouTube comments because those can get you sad. I see so much stuff on the Internet, sometimes I just want to go to Twitter and just go after people. But then I just think twice: If someone is dissing me, I’m going to make this person way more famous by tweeting them.”

On religion: “I think that’s part of the reason I’m here. Not just because I’m talented, but because God had a purpose for me to just help people. I’m spiritual … although I slept in [and missed] church yesterday. I haven’t been to church in so long, and I planned on going, and I slept in. I was upset. It’s all good. God forgives me.”

On the rumors: “I don’t need to address every speculation. Remember when Cam’ron dissed Jay-Z? Jay-Z didn’t even respond. Why didn’t he respond, because he’s Jay-Z.”

On his trust issues: “I get good vibes from people all the time, and I probably could get along with them and be their friend, but now I just don’t trust anybody. Literally, my phone never rings. I only have, like, four people that I keep in contact with. I don’t need a bunch of friends to make me happy. I just need the people close to me that I love, that’s all.”

Anyway, let’s lighten this up a notch and get away from the Justin Bieber/God comments. What do you think of the pics from the photo shoot? It looks like he’s going for a James Dean look, right? Oh, my little rebel. But he’s got a cause! There’s a plan for him! Douche, sit down. Selena Gomez you are one smart girl.