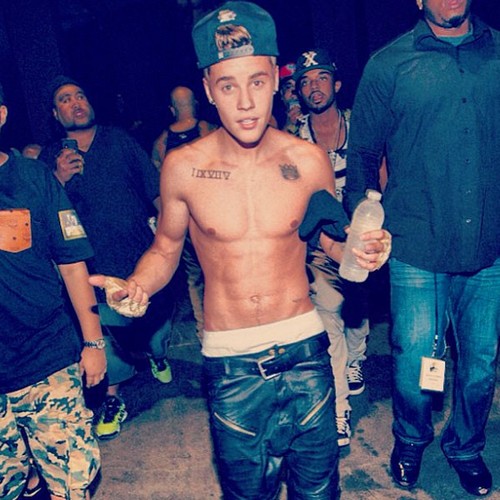 Justin Bieber’s shirtless photos were posted recently on Instagram making the day of many tween girls. The Biebs posted not one but two shots of him showing off his pecs and abs – queue you screaming fans and scream!

The boyish looking singer seems to have developed a style of going shirtless in photos on social media to the likes of many and dismay of many others.  In both shots he is sporting a backwards baseball hat and black pants that hang down showing off his boxers, seriously is that trend ever going to end? Both pics were sent out after his performance in Denver, as I am sure you are all well aware he is still on his “Believe” tour and he looks pretty darn happy with how the night went.

Being that I am not what one would call a Belieber, the shirtless photos are lost on me. However he has devoted fans that eat this kind of thing up.  He did not caption either shot but his beloved followers were not shy about sharing their thoughts on the pictures. Twitter and Instagram were both blowing up with remarks after the pictures were posted. My remark is “put a shirt back on” but again I am so not a fan.

Whether you love him or hate him the recent Justin Bieber shirtless photos have people talking and that could possibly be why he sent out this message regarding media scrutiny earlier today.

“Interesting how some people in the media wanna take shots at me for no reason. all good. keeping it positive over here. all about the music.”

Do think that Justin is trying too hard to prove that he is no longer the cute little boy he once was, by posting pictures of himself without a shirt? Tell us your thoughts in the below comments section.