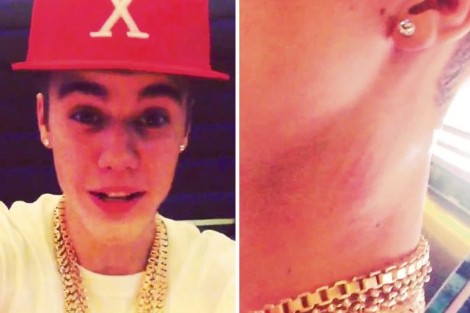 This has been a long time coming for Justin Bieber. Rehab is the next step. Most likely, he doesn’t really need it. But not all of them really need it. That’s not the point. The point is his image is screaming for it and Scooter Braun is finally facing facts.

Justin Bieber’s manager is at the stage now where he sees rehab as the only option. The little punk has been cited for driving recklessly, getting to shows late, being an asshole, whorin’ and drinkin’ AND leaving his pet monkey in foreign countries. He’s out of control! Naturally, it’s all because of the company he’s keeping.

“Justin is hanging out with the wrong people,” the source told Radar. “It’s been one incident after another with him and Braun has always been very supportive and still is. But now Scooter wants him to go to rehab to get his act together. Justin needs to get away from the bad influences in his life.”

I HATE when people blame friends for their bad behavior. But this is Justin Bieber… no accountability.

Although he did acknowledge that it was he and he alone responsible for his recent fall down the stairs. Justin Bieber posted a charming video of his little adventure with the caption: “Why I gotta fall and cut my neck before a photoshoot.”

Right before his photo shoot for Adidas, he decided to take a fall and bruise up his body. Why not? It’s only a job. It’s only other people’s jobs. Why be responsible and respectful at 19 when you have millions?

Does he seem high to you in the video? I’m getting that vibe. Either he’s high or he just really wants us to believe he is. Oh, Little Vanilla Ice… are girls still getting excited for this?

Have U Heard Recommends That The Rehab Collect From Justin In Advance – CLICK HERE To Learn Why!