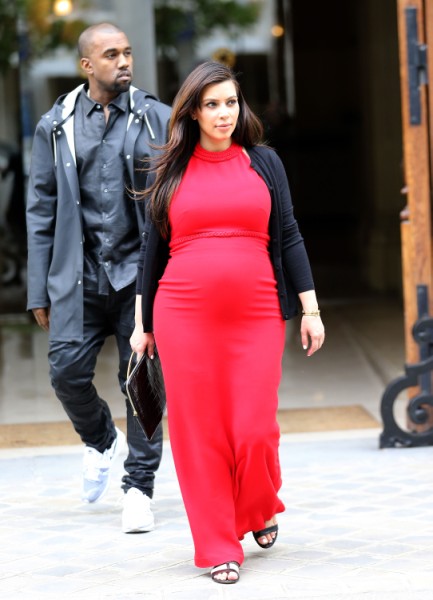 Kanye West is going all sort of crazy in Paris in an effort to make some sort of masterpiece out of his newest album, Yeezus. Or maybe, as is being reported, he’s driving all his producers crazy because he’s worried it’s going to be a colossal failure. Early reviews are mixed and Page Six reported Kanye’s still mixing tracks in the studio and the album is set to drop next week. An executive producer was just brought in to help finish it and executives are still haggling with rights over samples. Sounds like a nightmare, right? Kanye’s probably difficult to deal with in the best of times, can you imagine him under stress? Kim should count her blessing she’s stuck in L.A. thanks to her flying ban or whatever she’s choosing to call it. All I know is she wasn’t at Kanye’s birthday party in NYC and he sure as shit didn’t bring the party to her.

So should Kim be worried? I’m not saying she’s his Yoko or even his milder Kate Hudson but she will get a whole lot of backlash if this album doesn’t deliver. What’s funny is I’m not sure it’s entirely warranted. It’s not like he’s been loading her with special time and affection over the last six months. Thanks to good ‘ole Bruce we KNOW he’s been working in Paris. So his ass and his ass alone should be on the line. Besides, what does Kim  care about haters anyway? I’m pretty sure she lives off them by this point.

But I wonder if she’s nervous Kanye will throw this album in her face. He’s childish and unpredictable. Why not? Do you think Kanye’s the type of guy who blames himself for his mistakes? It’s always about other people and how they didn’t get him or didn’t help him or are out to get him. It’s ALWAYS someone else’s fault (even signs are out to hurt him). And who will be right there with that crying baby in the snug tour bus over the next six months? That’s right! Our Kimmy! If I were her I’d be rethinking that whole following my man on the road thing….

Do you think Kim Kardashian’s pregnancy interfered with Kanye West’s new album? Will Kanye think that if it flops or will the fans just point the finger?