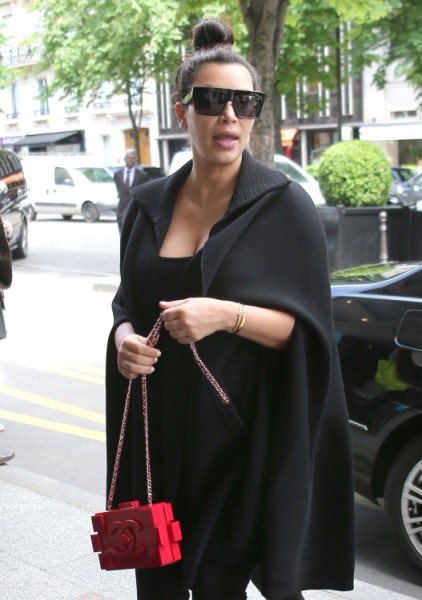 Another day, another set of Kim Kardashian photos. Ms. Howard Hughes is really staying reclusive in the later stages of this pregnancy, no? She’s still in Paris with her mom and the hilarious thing is that Kanye West isn’t even there this time around. It’s like he knew Kris Jenner was coming sohe  made an excuse to pop off to Milan for the week. Sources speculate Kim will meet him there but I doubt it. She tweeted or instagramed that she was returning with Kris after her “work” was done. Here she is going into Karl Lagerfeld’s studio. It kills me that he kisses her ass when he openly hates just about everyone else. I don’t get it.

But someone who is showing Kim the hate right now? Kourtney Kardashian! According to Radar Online, Kourtney’s branding Kim Kardashian selfish for toting her baby on the Kanye West tour so soon after its birth. Kourtney has the nerve to think the baby needs stability and schedules and claims there are health risks for carting a baby all over like that. Does she think one of the groupies will give it syphilis? Apparently this is all being filmed for the new season so I’m sure it’s just more of Kris’s manufactured drama. But Kourtney does have a point. That baby should be at home with Kim where they can just relax and find their groove – not on some bus following Kanye around. But Kim has to do what Kim has to do. Babies are pliant. This one will get with the show and fall in line. I’m just curious though. I wonder how many Kourtney Knows Best episodes we’re going to see this season. That’s going to irk the hell out of Kim and her minions.