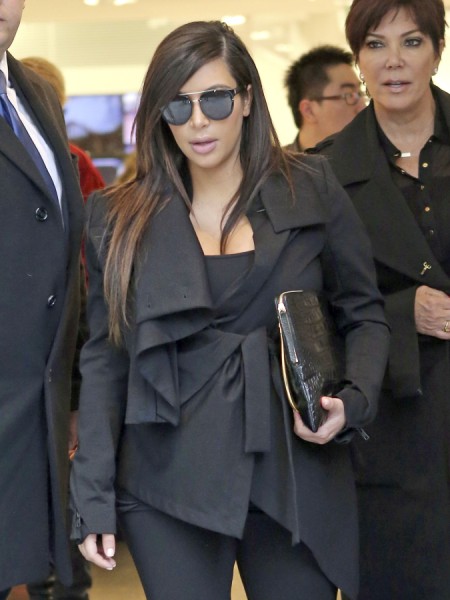 Um… isn’t this a no-brainer?

Clueless Kanye West is freaking out because he just now figured out his baby mama’s a famewhore. Well, welcome to the party Mr. West! He has a sneaking suspicion her bikini photos from Greece were staged! Well, god damn! No! Really? She’s photo shopped within an inch of her life. Of course they were staged with the agreement that she be made to look all smooth and plump!

Well, according to Radar Online, ever since Kanye woke the f-ck up he’s been nagging Kim about her Kris Jenner-like behavior and put his foot down about selling photos. He told her no more staged shots for her or their baby which sucks for Kris because sources say she already has an agreement with a magazine over Kim’s baby shower photos. Natch.

Kanye’s in a pickle for sure. On the one hand, when he’s not banging his head into signs, he’s screaming about how he’s not a celebrity and how the world won’t leave him alone. How can he justify that behavior and what Kim does for a living? He’s the biggest hypocrite in the world if he lets this go on. And you can’t tell me it’s only happening when he’s not around. Last time he and Kim were in Paris you know some of those shopping pics were staged. Kim doesn’t get all dolled up like that for nothing.

But is Kim Kardashian selling photos behind his back? I’m not so sure. I think and Kris have just been conducting business as usual and now it’s starting to bother Kanye. Kim and Kris can’t help what they are. And now they’ve taken their shenanigans to Kanye’s home turf. Have you seen the Kim Kardashian/Kris Jenner Paris pics? Those two are making asses out of themselves all over that city. It’s almost comical – probably not to Kanye – but definitely to everyone else. And cameras are following them every step of the way.

I like the fact that Kanye’s wisened up and finally fighting back but, I hate to say it, this might be a losing battle. With luck you might be able to teach an old dog new tricks but it’s infinitely harder when that dog is an attention-seeking dumb ass.