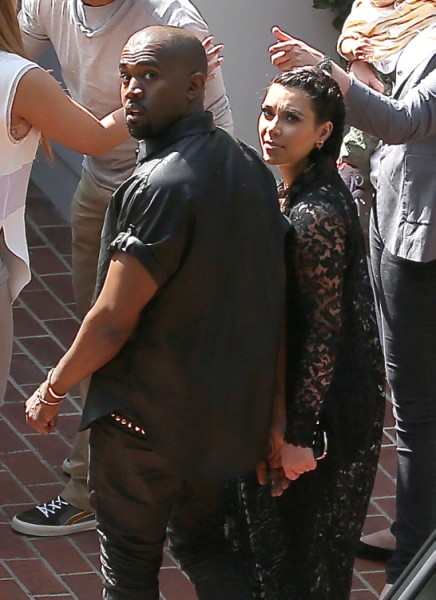 You saw Kanye West run into the sign, right? It was the video to watch over the weekend. You kinda felt bad for him because it probably hurt and he was super embarrassed. But I felt sorrier for Kim Kardashian. Ugh, she had to deal with that bruised ego after the fact. How did she not laugh? It’s my natural inclination to laugh at people getting minorly hurt first – especially family/baby daddys – and then to ask if they’re OK seconds later. But she played the concerned girlfriend right away. How amazing if the paparazzi would have scored a smirk. How can you not smirk at Kanye’s attitude 24/7?

Mama Kris Jenner is asking the same thing and apparently the matriarchal mogul is worried that Kanye’s anti-paparazzi/it’s all about me attitude is taking a toll on (the family business) and Kim’s tender, pregnant feelings.

“Kris is also concerned about how Kanye acts around the paparazzi. The Kardashians have made their names off the back off being photographed, but Kanye has a real aversion to it,” a source told Radar Online. “The incident in Beverly Hills last Friday when he walked into the street sign was just the latest in a string of issues that have concerned Kris. When they were in Paris, Kanye kept telling the paparazzi to leave him and Kim alone. But as a manager, Kris wants Kim and Kayne to be photographed; it’s their gig.”

Kim basically said as much in her Fabulous magazine interview. How do you balance your need for paparazzi with your need for privacy? It’ll be tough especially with Kanye freaking out every step of the way. And he is falling apart. Gwyneth called him out for acting like a dumb ass at the Met Ball and now we have him screaming in the streets. He is not handling his shit and that sucks for relationships. Maybe he’s just nervous about the baby. Maybe he’s in uber protective father mode but you’ve got to shake your head and wonder at a dude who can’t keep his cool. I’m right there with Kris Jenner. Worried is what I’d be too. I’m telling you… a wedding is a long shot at this point.

Does Kanye West treat Kim Kardashian poorly or does he just take advantage of her I want to please nature?

Girls Talkin Smack Explains How and Why Kim Is “Nervous & Anxious” About Being A Mother – CLICK HERE!!