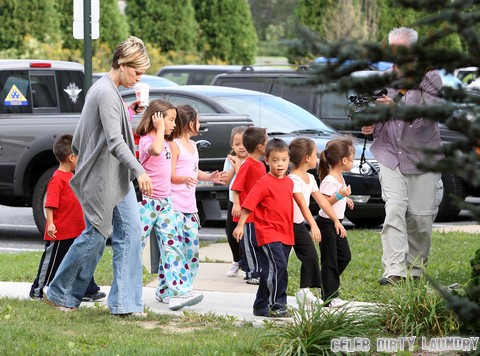 Jon Gosselin‘s passive aggressive war of words against Kate Gosselin continues. Although he hasn’t come right out and blamed Kate Gosselin for anything, he’s been slowly and publicly been building a campaign showcasing Kate Gosselin as the ‘bad’ parent. In the latest snippet released from Jon’s interview with Oprah [Winfrey], he blames his children’s shortcomings on Kate’s parenting skills.

Well, to be fair, he doesn’t quite say it exactly like that. He says that the show Jon and Kate Plus 8, despite bringing them fame and fortune, destroyed his marriage, reputation, career, and now children. He explains, “I saw my kids not growing up normally, like I grew up, and having community. Yes, they got to travel the world, and yes, they got these fabulous things, and yes, they have trust funds, and they’re taken care of educationally. Great. But developmentally, they have problems with their peers, and they have problems with talking to other people, and they have problems with wants and needs and manners and morals and what’s right and what’s wrong. I think more so than someone who grows up off TV.”

The fact that he claims that they have issues with ‘morals’ and what’s ‘right and wrong’ is clearly a jab against Kate’s parenting skill, and he has stated in the past that doing the reality show was mostly Kate’s idea. It’s obvious that he’s trying to set himself up as the ‘good’ parents whereas Kate is the ‘bad’ parent. It’s not clear what his endgame is, but he’s been so publicly visible lately that it might just be that he’s trying to fix his reputation and ruin Kate’s. He even says the show became ‘stressful’ on him and the children, but gives no mention of Kate, even though she was on the show with them.

What do you guys think about Jon’s slow and steady campaign against Kate? Do you think it’s working, or do you think Jon’s just full of it? Let us know your thoughts in the comments.