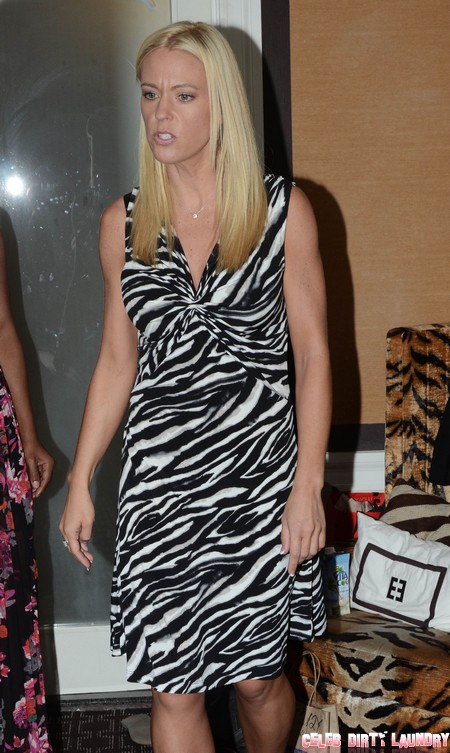 Kate Gosselin just can’t catch a break for very long. Last year she managed to halt distribution on a book that presented her as a severely abusive mother. The book penned by Robert Hoffman may have never reached book shelves but enough quotes from it circulated to totally wreck any attempt that Kate was making at trying to transform herself into mother of the year.  Jon Gosselin supposedly gave Hoffman access to Kate’s diaries from when her eight kids were babies and they documented all sorts of abuse.

Kate was relieved to block publication once but it seems that Hoffman has tweaked just enough to make another attempt at getting this thing into print. Kate is said to be a nervous wreck over the allegations but is following her attorneys advice and not commenting publicly. She sat for an interview last week and acknowledged that in the years since those journals were written she has changed.

“I was a different person back then. But that show is as real as you’re going to get. I just want to focus on my kids so I don’t get much time to read that stuff. I hate bullies. I was bullied as a kid.

Ironically enough there is a whole bunch of bullying between anti-Kate fans and her supporters. According to the group Bullyville, they’ve finally decided to identify the woman harassing Kate. They decided to fully out the 62 year old with a full screen cap of her nasty messages to Kate. I’m not sure what exactly this angle is supposed to prove. Kate is a huge supporter of Bullyville but aren’t they replicating the exact behavior that they claim to despise?

If Kate was being harassed her followers are now ganging up on the woman who was bothering her. I get that she needed support but you can’t be against bullying only when it benefits you and then promote the behavior the other half of the time. Kate’s Twitter war isn’t about to help what is supposedly a big cause for her! Do you think Kate deserves the backlash and bad press that she gets? Tell us your thoughts in the comments below!