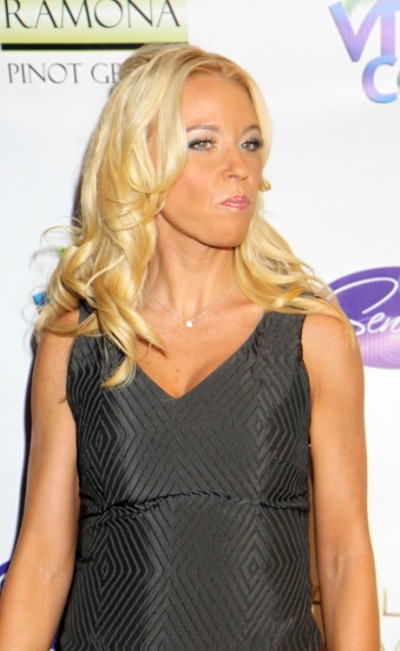 Kate Gosselin can lose as much weight as she wants and flash her new pearly whites all over town but a friend of ex-husband Jon Gosselin is not letting her glittery facade fool anyone. Journalist, Robert Hoffman, told Star magazine all about the animal abuse Kate Gosselin imposed on her two German shepherds before she made Jon return them to the breeder in 2009. Apparently she beat and starved them when Jon wasn’t around to take care of them himself. She’s obviously not a dog person and never wanted the dogs to begin with but only allowed them because her show at the time needed content. So she’s boring and she took it out on the dogs. Such a witch.

Hoffman told Star. “Kate left the family dogs in their cages behind the house for hours on end with no food. She never cleaned the cages,” says Hoffman. “Jon would return to find them filled with urine, poop and puke. I saw vomit in them.”

Let’s take into consideration that Hoffman wrote the book, Kate Gosselin: How She Fooled the World, so there’s no love lost there but he still has some pretty gripping and disturbing stuff. “She would knock them [the dogs] over the head and yell,” Hoffman said. “The abuse caused Nala to become very resistant to Kate, so that any time she came around, Nala growled. After a while, Kate began to fear she’d be attacked, so she sent the dog back to the breeder.”

Look, I know you’ve got fifty kids and it can be tough taking care of everything when you’re husband’s not around but people who fail to  take care of their animals are scum. How could you do anything like that to a defenseless creature! I’ve got two dogs  (and no kids) so naturally this is a major thing for me. I can’t even watch those damn Sarah McLachlan ads on TV because it’s just too much and I will  hate Michael Vick to the day I die. But is this story true? Did Kate Gosselin beat and starve her dogs or does this guy just have it out for her? Well… she does beat her kids with spoons. Why not dogs? I kinda thought all the Kate bashing from Jon’s end was over. Wasn’t there some kind of detente issued? Apparently Jon’s friends didn’t get the memo. If there’s still money to be made selling Kate Gosselin horror stories then why not? Still, I hope this isn’t true for the dog’s sake,  not for Kate’s. I don’t care about her whatsoever.