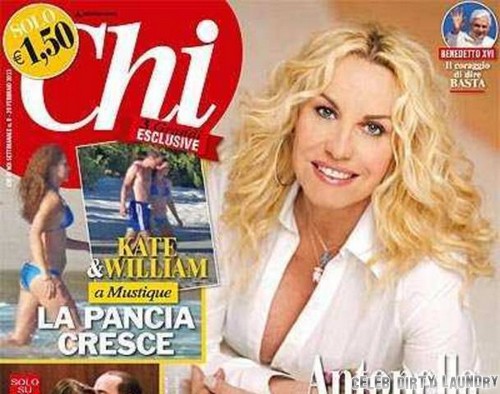 Are Duchess of Cambridge Kate Middleton and her husband Prince William expecting a baby boy? After looking at her newly released baby bump photos, it would appear as such!

You know what they say, when a pregnant mother is carrying low, that she is having a boy? Well, it would appear that Duchess Waity Katy is going to produce a son for Prince William! Wouldn’t that be just so exciting?!?

I bet now that the tabloid covers have come out that she’s wishing that they didn’t splurge that whopping $200,000 on that vacation to Mustique. Perhaps she is now wishing that they went on vacation somewhere a little more private?

Either way, we’re happy that the Duchess appears to be in better spirits following her health scare with the morning sickness. If she can spend eight hours aboard a flight to Mustique to go prancing around in a bikini, then you know she must be feeling better.

If Kate and William do have a boy, what do you think they should name him? Sound off with your thoughts in the comments below!