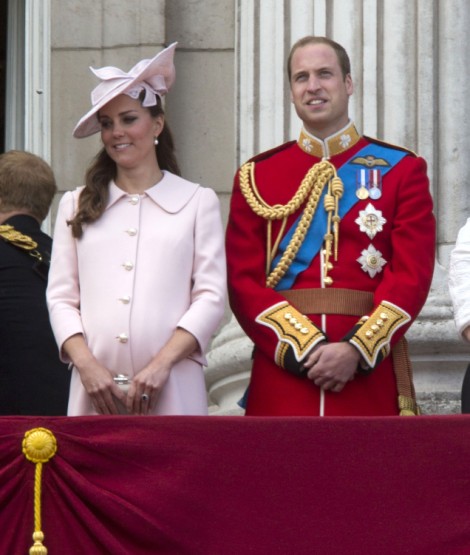 Ah, so we might be done with Kate Middleton pics for awhile but at least we have some new ones of her men – Prince William and Prince Harry battling it out against each other on the polo field this weekend. The two took part in a charity match in Gloucestershire. Wills might be losing his hair in record time and have a smug, disinterested look on his face most of the time nowadays but put him on a horse and I’m 12 all over again. So cute! Did you see the girl that freaked out? This girl at the match had no idea the brothers would be there and ran up to them to take a pic on her phone. The photos are super adorable. That’s how I would have acted – bat shit crazy. And the princes’ expressions were awesome too. Perhaps it was the polo? Prince William is entertained by her reaction but kinda tired of it but Harry’s unfazed. He finds it just as hilarious as we do. So fun, right? He gives good smile. That’s why we all love us some Harry.

But enough about the men and their horses. Kate Middleton was noticeably absent at the match because she’s gone into incubation hiding mode. Kim Kardashian’s premature labor scared Kate from picking anything up or getting out of bed for the next six weeks. But did she leave us some hints as to the sex of the baby during her last appearance? Many are speculating that Kate’s pretty in pink ensemble at the Trooping of the Colors was a hint at the baby’s gender. Kate Middleton wouldn’t do that, would she? Is she playing with our minds?? I’m thinking no. Kate likes her pastels and she especially likes to keep things muted whenever she’s attending a special ceremony for the Queen. If she was going to drop some hints I doubt it would be during the Queen’s birthday parade. Nice try people but I’ve called it all along. Prince Philip all the way!

What do you think about a potential baby girl? Kate Middleton could be trying to tell us something but I really don’t think she’s that crafty. She probably went with the ensemble because it was the one that made her look the best that day. Remember, she’s vain, but not particularly exciting.