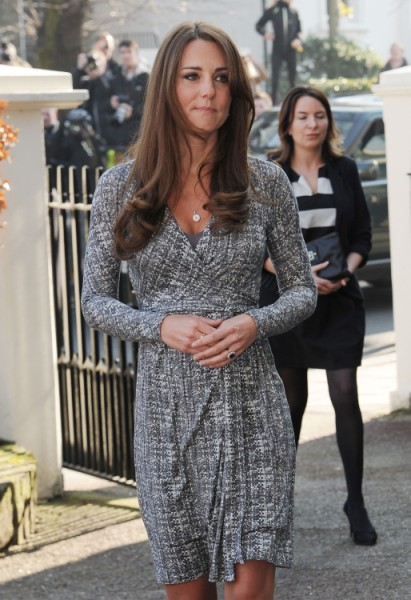 Seemingly days overdue Kate Middleton is giving the conspiracy theorists loads of time to theorize. For instance, could she and Prince William be giving the media the big slip? Is she really going to deliver at St Mary’s Hospital or did the palace just confirm that to keep them away from the real venue? Anything’s possible at this point.

The Telegraph reports that the hospital closer to her parents’ house, the Royal Berkshire, has also been prepped to deliver a royal baby.  If Kate’s doctors think it’s going to be a rush job then they won’t bother with the long drive to London. Instead the royal gynecologist will mosey on down to the Middleton’s neck of the woods. So it’s still just a contingency plan, right? I’m not so sure. Have you seen what it looks like outside St. Mary’s lately? I wouldn’t want to go there. Hells no! It’s a nut-job whack house. I wouldn’t be surprised if William is concocting this plan to keep Kate away. It would explain why she’s still in Berkshire. Maybe they are making it so that Kate will have no choice but to go to the Berkshire hospital. That way no one can slam her for opting out of St. Mary’s. I can see it now. “It wasn’t our fault. The doctors told us to stay where we were! It was an emergency!”

I still think they should stay in the Middleton compound and have Carole Middleton deliver the baby but that’s just me.

It’s not like the media won’t get its photo op at the Berkshire hospital. Kate Middleton will still pose with the baby outside the front steps. But this way she’ll at least get to go into a fairly calm environment while she delivers. This fake out could buy her a couple hours which isn’t much during a first labor but at least it’s something.

What do you think? Is Kate Middleton faking everyone out? Will she deliver in London or Berkshire? Dear Lord, could today be the day?