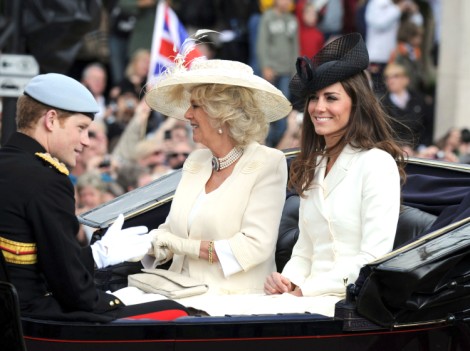 Kate Middleton has got to be loving the fact that Prince Harry is back from Afghanistan because he’s such a dumb ass. In fact, that’s what the title of this post was going to be at first, Prince Harry Is A Dumb Ass, but I wasn’t sure if it would convey the whole message of the post. Let me know at the end.

So Prince Harry’s partying hasn’t stopped since he came home from war. We’ve mentioned it a few times here but, for the most part, it’s been harmless and fun since he’s just letting off steam. He likes to let off steam and we like to hear the stories that come from it. But this time even I’ve got to shake my head. Prince Harry is costing a London nightclub over $1,500 for a recent night out. To avoid photographers, Harry likes to use the fire exit when he’s out with friends and he did when he visited the 151 Club in King’s Road. But the owner got quite a surprise the next day. A health and safety officer turned up to order him to resurface the back yard of the club in case Harry trips and hurts himself during his next late night escape. The owner told the Evening Standard: “He [the officer] turned up the very next day after it was reported Harry had left by the back exit. I assume they saw a report of it and just came round. Apparently there were concerns Prince Harry might trip up and hurt himself next time. I couldn’t believe it, not least because it was not long afterwards Harry was sent to Afghanistan where, of course, there was a bit more chance of him really getting hurt. I ended up having to pay for the repairs. I don’t mind but I haven’t seen him since.”

At one point you’ve got to think $1,500 is getting off easy if Harry comes to your club. Think of all the business it’s going  to get now when princess wannabees desperate to catch a glimpse of him turn up to spend money. On the other hand, Harry could have sent a check in thanks or maybe a note saying he was sorry for the inconvenience. But, no, Harry blames the media for everything. The media was the reason he had to go out the back exit, therefore the media owes the nightclub owner $1,500.

But who cares, right? It’s Harry! If it were Kate or Pippa it would be a totally different story. They’ve be raked over the coals for acting so uppity. Still though, Kate’s got to be loving this. If Harry keeps the press busy with all of his drunken antics in London they will be less likely to bust her for all her vacations. Kate Middleton must have been made aware that this is probably why royal families have spares to begin with. They take the heat off the heirs. And if Camilla is going to keep pointing out how little Kate is doing then Kate needs someone to make her look better. Harry’s your man! He’s only happy to do it!

So are Harry’s actions douchey or just Harry?